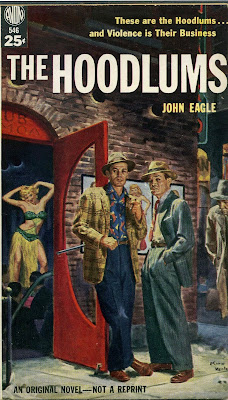 John Eagle was a pseudonym utilized by George Benet who was born in Chicago in 1918. In 1952 when paperbacks were exploding as a medium, Benet moved to New York City and wrote this crime novel called The Hoodlums. The Avon book sold a half-a-million copies and was reprinted in 1956. The paperback has found new life in 2021 as a reprint from Black Gat Books retaining the original cover art.

Despite being lucky, smart and aggressive, ex-con Kirk Wagner is broke at age 26. His three-year stint in prison arose from an armed robbery followed by a double-cross that landed Kirk in the slammer while his partner Martin got away with the dough. To his credit, Kirk never squealed. Now that he’s been out for two weeks, Kirk is trying to make ends meet with a legit job in Chicago. But it’s hard, man, hard.

Three years without a woman is a long time, so Kirk tries to catch up with Jeannie, a hot little dish he dated for a spell before he got pinched. The time has been good to Jeannie - she’s stacked and seems to be a sex-positive kinda chick. Meanwhile, Kirk gets word that his old pal Martin has returned to Chicago. He allegedly wants to make things right for the double-cross that landed Kirk in prison. But how do you repay someone for three years in the slammer?

Benet/Eagle was a much better writer than most of his 1953 paperback contemporaries. His vocabulary and descriptors belie literary aspirations that surpass the hoodlum genre. The plotting, however, was a bit slow, meandering, and largely non-existent. The first quarter of the book has Kirk and his vagrant friends bumming around Chicago trying to stay warm and behaving like drunken characters from a David Goodis book. When Martin returns to Chicago something resembling a normal scam plot begins to take shape. It’s all well-written and compelling, but you would never describe The Hoodlums as being a propulsive thriller or having a normal story arc. Things happen, but it’s more like a reality show following a small-time hoodlum around Chicago’s underworld as he barely makes ends meet. Some of the vignettes are better than others, but the novel was never boring.

Despite having no real plot, I found myself enjoying The Hoodlums. It was like a blues song set to melodic prose, and I appreciated how different it was. Most of the crime novels from the early 1950s made their magic from tightly-wound stories with twists and turns along the way. The Hoodlums took a different route, and it largely worked for me. Your mileage may vary.