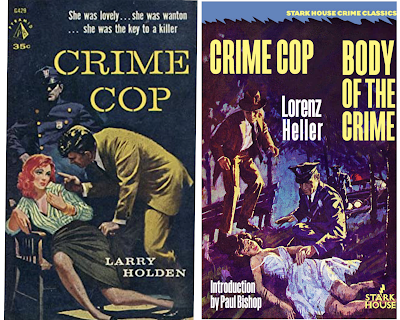 Using the pseudonyms Larry Holden and Larry Heller, New Jersey native Lorenz F. Heller (1910-1965) authored two police procedural crime novels in 1959 and 1962 titled Crime Cop and Body of the Crime. Stark House Press has reprinted these lean thrillers in one volume with an introduction by retired LAPD detective and author Paul Bishop. As a huge fan of Heller’s writing, I was excited to plunge into Crime Cop.

Taking cues from Ed McBain’s 87th Precinct series, Crime Cop is set in the fictional metropolis of Hudson. Heller does a nice job of mimicking McBain’s third-person narrative voice. Our featured cops are robbery Detectives Jeff Flavin and George Gilman (presumably before he wrote the Edge westerns), and they are busy dealing with actual crimes, chronic complainers and tips from chatty stoolies.

Amid the day-to-day chaos, Flavin is summoned to a boss’ office to be briefed on a big case. A series of residential home invasion robberies resulted in the death of a female homeowner. Homicide is working the killing, and they need Flavin and his partner to tackle the robberies providing the department with two avenues to solve the crime.

Beyond the normal procedural steps of interviewing potential witnesses, there is some interesting pre-computer police science elements to the plot that were completely fascinating. The compiling of clues and inferences gained from those clues is an exercise in pure Sherlockian deduction. As cops, Flavin and Gilman are logic machines and a pleasure to read.

Smart legwork by the crime cops - punctuated by vivid hardboiled dialogue - develops a viable suspect for the robberies and the killing. There are twists and turns along the way. We also get several vividly-drawn characters filling out the cast, culminating in a satisfying ending.

Crime Cop reminded me of an exceptional Ed McBain 87th Precinct cover band. In many ways, I preferred Heller’s writing and plotting to McBain’s work. The good news is that - thanks to Stark House - readers don’t need to choose. Read them both.

There’s a homicide detective in Crime Cop named Ben Tutchek who is the main character in the author’s Body of the Crime. Interestingly, the 1962 paperback was published under the quasi-pseudonym of Larry Heller. The author was setting himself up for a Marvel Universe (or 87th Precinct) of inter-connected cop stories from Pyramid Books, but tepid sales couldn’t justify a third novel. Thanks to Stark House for reuniting this two-book “series” into a single volume.