Too Early to Tell 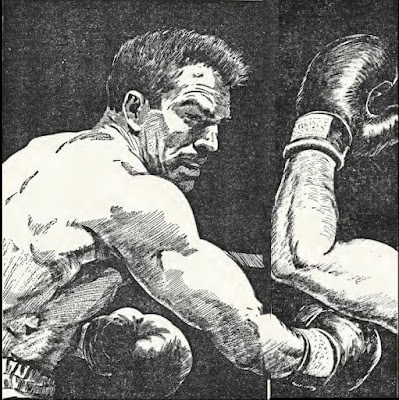 Between the 1930s and 1950s, John D. MacDonald authored over 500 short stories for the pulp magazines and digests. Often, he used pseudonyms so he could appear multiple times in the same issue.  Shortly after moving his family to Florida, and before his first paperback original was published (The Brass Cupcake, 1951 Fawcett), MacDonald's fight story “Too Early to Tell” was published in the October, 1950 issue of Adventure. The story and entire issue is available for free HERE.

The story is presented in first-person narrative by Lew, a gym rat that is friends with an older, veteran fight-trainer named Micky. At a rough local dive bar, Micky watches an irritating kid named “Junior” badmouth the patrons, then proceed to waylay a half-dozen men before being sapped. Micky drives the drunk and dazed kid home and then later gains his life story.

Junior's real name is Harkness Willoughby Franklin the Third and he's living with a sizable emotional burden. His father died, his mother remarried and they moved to California where she started a new family. Considering Junior a forgettable bad apple, his mother sends him to a private school in Massachusetts. Over the years, Junior has asked to visit the family, only to be rejected and then promptly receiving a check in the mail. Now, Junior is mad at the world and Micky thinks he can channel that negative energy into boxing.

Most fight stories simultaneously spin a rags-to-riches lesson on responsibility, humility, determination, and internal fortitude. MacDonald's story is interesting because Junior is never a likable protagonist. That's what makes this so unique and engaging. The story, approximately eight pages in length, contains Junior's rise through the ranks to attain the coveted title shot. But, there's a side-story involving the sister of Micky's former protegee falling for Junior despite his angry, emotional barricade.

If you love in-ring action, MacDonald delivers a great, climactic bout in the story's conclusion. With its clash of characters, fighting, and emotional undertakings, “Too Early to Tell” was an enjoyable reading experience.