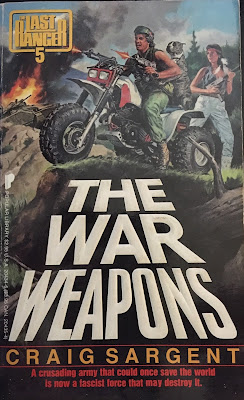 The doomsday epic from Jan Stacy rolls on as Martin Stone continues his pursuit of that raving lunatic General Patton III. But Hell, it's doomsday and anything goes. After Stone saved the world in book four, 'The Rabid Brigadier', he sets out on a path to crush Patton. After a rather lifeless fourth entry, 'The War Weapons' gets back on track with what we love about the series.

This one picks up as Stone and his rag-tag clan of overnight heroes pursue Patton in Bradley tanks across the desert. Sargent does his best detailing the Bradley machines and their positioning and pursuit of the baddies. I think he's probably a bit off with the tank mechanics and technical prowess, but who cares when he is providing this much explosive firepower. Right? Right. And what's the deal with this superpooch dog Stone has been carrying around through the wasteland? You are telling me Excalibur has lived through maniacal rapers and apocalyptic raiders? I call bologna.

After a hot pursuit through the desert the gang gets obliterated, wreck the tanks and Stone ends up being captured by Patton. In scenes that can only be a bi-product of the 80s, Patton and his savages go to work in the torture chapter ("Rambo 2"). Stone gets annihilated by beatings and then staked out on a massive wooden X after being dipped in some sort of sweet sticky substance that attracts massive ants. Soon Stone is a Golden Corral buffet as the ants swarm onto him and start chewing up the baby fat like a rat on a cheeto....or a mutant ant on honey dipped man-candy. Left to die in the wasteland doesn't last long though. A Cheyenne warrior named Meyra shows up for the rescue and fodder for the lovemaking. Before Stone begins to bone, the Cheyenne warrior princess rubs "healing paste" all over our hero and makes him good as new. Goldbond powder? After a miracle healing and a good lay, Stone joins the Cheyenne warriors on an all-out assault on the General and his goons.

'The War Weapons' provided a ton of action, from the climatic assault, escaping torture and battling back to back with Native Americans. It was predictable, and maybe even a little short on plot, but the end result is another classic 80s action yarn in what has been a really good post-apocalypse series thus far. In terms of re-reading the series, I would pull only select titles including this one. The author nailed it.
Posted by Paperback Warrior at 9:11 AM