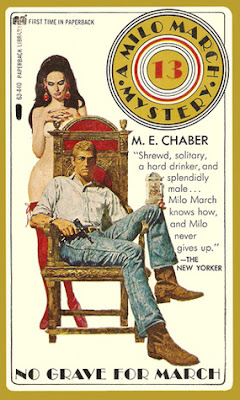 Milo March was a fictional spy turned insurance investigator created by Kendell Foster Crossen using the pseudonym M.E. Chaber. The series ran for 22 novels and a handful of short stories from 1952 to 1973, and is currently being reprinted by Steeger Books with fetching cover art. Based on a tip from Crossen’s daughter, author and literary estate curator Kendra Crossen Burroughs, I decided begin my march into the series with the second installment, No Grave for March from 1953.

March is an investigator for Denver-based Intercontinental Insurance, but he used to be a OSS operative during World War 2. Some of his books are straight-up property crime investigations and in other books, the U.S. government presses March back into service for an espionage assignment. This series setup provided the author great flexibility to plug his hero into any kind of pulpy genre book he felt like writing. No Grave for March is an international spy adventure paperback.

As the novel opens, March has been away from the spy business for seven years. He is summoned to a clandestine meeting in Washington, D.C. with an old colleague from his war days. It seems a diplomat with a head full of secrets has defected to the Soviet client state of East Germany. Because March speaks German, he is the choice to slip behind the iron curtain, kidnap the diplomat, and bring him back to the West. One of the secrets at stake is a mind-control device that can reprogram the public to either love Stalin or apple pie depending on who’s pulling the trigger.

I had always written off the Milo March books as being lightweight, inconsequential paperbacks along the same lines of Richard Prather’s Shell Scott or the many heroes of Carter Brown. Instead, the author put some actual thought into his work with summaries of communist theory embedded into the plot-line and interesting historical tidbits. This isn’t a work of genius, but it’s also not completely disposable fiction.

It’s also not a fast-moving shoot-em-up paperback. March spends a good bit of the novel just trying to convince the commies that he’s one of them and not an American spy. I found this fascinating, but it’s certainly not a breakneck Killmaster thrill ride. Crossen also has an annoying habit of writing lots of dialogue in German and Russian with no translation. You get the gist, but why bother showing off like that? There’s also a lot of specifics about East German tactics, ambitions, and party machinations that you will find either interesting or not.

Things become very exciting in the novel’s final act with a pulpy action sequence among the best I’ve read. I wish the rest of the paperback had set pieces as thrilling as the conclusion. Despite some missteps along the way, I genuinely enjoyed No Grave for March, and I look forward to exploring more of the series in the future.

No Grave for March has been reprinted several times. In the Paperback Library 1970 edition pictured above, the publisher numbered the installment #13. Don’t be fooled: it was truly book #2 in the series. An earlier printing of the novel was titled All the Way Down. Unless you’re a hardcore collector, don’t buy the same book trice.

Also, the Steeger House reprint contains an interview with Kendell Foster Crossen from 1975 that was informative for both his fans and pulp fiction historians.