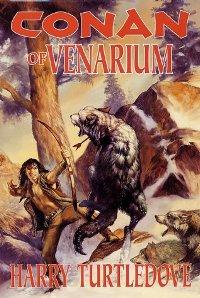 I'm just now getting my sleeves rolled up for Conan. I've been reading a few of the Dark Horse comics and the reboot they did in 2004. I ran into a chronological list of Conan novels online at a fan site that was compiled in order by the character's actual age. In moving from comics to the actual novels I felt maybe I could read everything from what original creator Robert E. Howard did through all of the various authors who have contributed to this iconic character and it's universe.

My list starts with Conan Of Venarium, a novel written by science-fiction author Harry Turtledove. This "intro" book gets tons of backlash from the die-hard fans because some of the dates don't match the timeline that most consider valuable. I don't see how any of that really matters considering the original creator had Conan in all different ages from young boy to old man. It's all up to interpretation...that is sort of the attraction for authors to continually contribute.

This book shows us Conan at age 15. He lives in Cimmeria with his parents in a village called Douthil. His mom is dying of something akin to tuberculosis and his father, Mordec, is a blacksmith. The southern neighboring country called Aquilonia sends raiders to Cimmeria to take it over and envelope the land into their kingdom.
At first the Cimmerians make a stand minus Conan because his abusive father beats the Hell out of him and forces him to stay off the battlefield. The Cimmerians lose and Aquilonia basically forces themselves into Cimmeria. They aren't necessarily cruel or hostile, they simply want to allow their people to farm there, use the resources and still allow the Cimmerians freedom, albeit a far cry from what the barbarians would consider a proud lifestyle. This doesn't sit well with Conan and Turtledove really uses this novel to show us the fury and rage that builds in the character at such an early age. By book's end, Conan has become a man, a warrior and finds that he no longer belongs in Cimmeria. The end was very fitting as we see Conan choose NOT to pick sides in an upcoming war and he starts out on his own as a wanderer and a thief. This obviously sets the tone for the future of the character.

I think Turtledove does Conan very similar to Braveheart and I'm okay with that. I think this was a great introduction to the character and a recommended read for newbies like myself. Like anything, some fans love it, others not so much. But the greatest aspect of these books and this character is that there is plenty for everyone. There are hundreds of books, comics, magazines to turn to including three films and a couple of video games. I'm all for a buffet, just keep it clean and tidy.

Buy a copy of this book here
Posted by Paperback Warrior at 10:46 PM