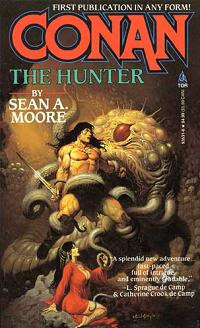 Sean Moore's Conan The Hunter is thrust into the life of Conan chronologically after the wretched Steve Perry novel Conan The Defiant. Some argue that Conan The Indomitable, also by Perry, would be next, but I'm not terribly certain. I don't know that it really matters in the grand scheme of all things Conan. Conan the Hunter was published in 1994 by Tor and is one of three Sean Moore installments in the series.

I can't say Moore is any worse than Perry, but he certainly isn't miles better either. Conan The Hunter would have been a much better book if it wasn't written in phases. We get a huge cross section of this book that plays out like an urban thriller. Then, Moore stretches the thin plot thousands of miles across a desert wasteland to eventually culminate in a finale inside yet another desolate temple.

This book begins with Conan drunk and gambling in the area of Zamora (he does say at the end of Conan The Defiant that he is headed here). He has picked up a night wench called Yvanna and has made arrangements to pay for sex by giving her a jeweled bracelet. The bracelet was stolen from a murdered princess and now all fingers are pointing at Conan as the killer. After a few chase scenes, some treachery and intrigue we see Conan trapped in a dungeon courtesy of the deceitful Mutare.

Moore keeps a brisk pace and provides ample battle scenes to increase the excitement. It is once Conan teams with Salvorus, Kailash and a priest named Madesus that things really became too bogged down. I thought the chase scene across the desert in pursuit of Mutare was unnecessary. We could have skipped thirty pages here and just put the band of heroes right in the temple. But, the climactic battle is decent and Conan fights temple gargoyles! Who can argue with that?

I'm not dreading Moore's next two entries, but Conan's chronological life includes four more Perry novels as well as two titles from Leonard Moore before the next Moore title.
Posted by Paperback Warrior at 9:08 AM