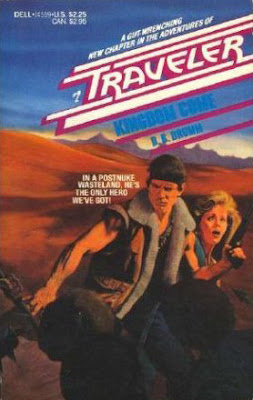 Following on the dirt tracks of “Traveler” debut “First, You Fight” comes the inevitable sequel, “Kingdom Come”. We get Michael Dudikoff this time in place of Christopher Walken as the visual interpretation of our paperback hero. I’m probably reaching, but it’s my show, right? It was released in 1984 via Dell for a cool $2.25. I’m paying $8 for these and they look like used toilet paper. What the Hell?

Like the first book, adorning the back page comes more engaging invitations like, “His only goal: to keep moving, his only skill: staying alive” and “His only code: shoot first and ask questions. He was perfect for the job they had in mind”. What does all that mean? It’s simple – The Traveler is a badass ex-special forces guy who has a neurotoxin in his body that elevates his senses and gives him tremendous integrity. Mix that with the hot wheels violent van, The Meat Wagon, and we’ve got a bona fide post apocalypse star.

Sci-fi author John Shirley takes over this book and the next four, introducing a bit more backstory with Traveler’s pre-nuke existence. His name is actually Kiel Paxton, and his family was killed during the attack. The Traveler is now cruising the wasteland searching for the guy who set him up, Major Vallone, as well as his old commando teammates so he can cure them of their poison. For book two, he’s running rampant in Kansas circa 2004 (back when anything 2000 was surely doomsday) and once again finds himself caught up in the crazy actions of others. While I loved the first book, penned by Ed Naha, this one is a bit messy and…ridiculous. Traveler takes on a new job to escort so-called Princess Sandy of Wichita to Kansas City so she can marry Baron Moorcock’s son (Peter North has nothing on this shit).

The whole thing reminds me of the most recent Mad Max movie, “Fury Road”, as one long race. Traveler fights off some mutants and gangs and generally plays cavalier with more guns and brains. A new arch enemy is introduced named Black Rider, a biker who is on his own assignment from Major Vallone to kill Traveler. Black Rider will show up again in book three…so just wait for it.


Overall, this one disappointed me after the stellar first entry. I sort of held off on reading any more in the series but picked up the more superior third novel, “The Stalkers”. It mirrors the first book’s action and pacing, proving “The Traveler” could be a great series.

Buy a copy of this book HERE
Posted by Paperback Warrior at 8:23 PM