Soldier of Fortune #02 - The Deadliest Game 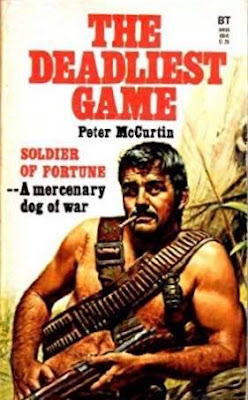 The 'Soldier of Fortune' series was published between 1976 and 1985 with a brief hiatus in the early 80s. The series was created and edited by Peter McCurtin (1929-1997), a talented action-adventure scribe who also authored 10 of the series' 18 installments. The premise is very simple: anti-hero Jim Rainey is a professional soldier for hire whose loyalties always lie with the side who signs the checks. “The Deadliest Game” (1976) is the series' second novel and finds Rainey hunting terrorists in Argentina.

Political extremists calling themselves the Cordoba Committe are terrorizing the Argentinean city of La Boca. While visiting a friend named Quinlan, Rainey finds himself in the terrorists' crossfire at the War Ministry Annex. After teaming with Quinlan to kill the baddies, the country's president offers Rainey $5,000 if he can dispose of the terrorist cell. Rainey accepts under the condition that he has complete autonomy in his methods. However, the president still wants Rainey to adhere to some military rules of engagement and assigns him an ex-Nazi leader named Richter to assist.

The book's early chapters features Rainey recruiting the vilest of mercenaries for the job. Playing off of 1967's “The Dirty Dozen” (and “Garrison's Gorillas” television show), Rainey eventually incorporates military criminals into his small Army. But aside from the Cordoba Committe, Rainey's stiffest opposition is Richter, an old war horse who favors uniformed parades over modern day guerrilla tactics.

I've always loved McCurtin's writing style, and this novel nicely showcases the author's talent. His first-person narrative adds a unique perspective to what is quintessentially a team-based combat book. In the hands of another author, Rainey's character could have been one-dimensional with the familiar formula of 1-2-3-Kill. Thankfully under McCurtin's prose, both Rainey and the supporting characters are far more dynamic. McCurtin's colleague, author Ralph Hayes, wrote seven of the series' installments under McCurtin's name, and I think they are equals in terms of storytelling.

Despite the average finale, I found “The Deadliest Game” to be a riveting, high-caliber read. The novel was released by both Tower and Belmont in the U.S. and features two different covers. For a complete bibliography and some additional series background, check out the Paperback Warrior review for the 17th entry “Bloodbath” HERE.

Buy a copy HERE
Posted by Paperback Warrior at 6:00 AM