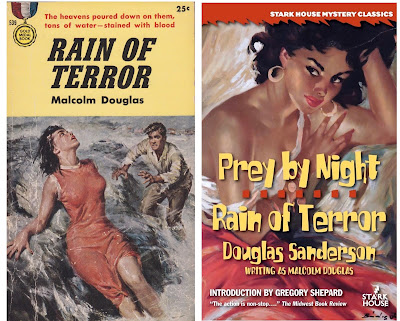 Douglas Sanderson (1920-2002) was born in England and moved to Canada in 1947 after serving with the Brits during WWII. In Canada, he manufactured breakfast cereal, sold jewelry and sang in nightclubs to make a living before becoming a full-time novelist in 1952. His hardboiled crime and thriller paperbacks - 25 novels in all - were mostly published under the pseudonyms of Martin Brett and Malcolm Douglas, and Stark House Books has been reprinting Sanderson’s work slowly over the past few years. The latest re-release is a trade paperback compiling two Fawcett Gold Medal novels from 1955 - Prey by Night and the subject of today’s review, Rain of Terror.

Jake Abbott is an American living in Rome working as a news reporter for a wire service. He’s got a lucrative side-hustle introducing suckers to a counterfeit art dealer named Mr. Turrido. For his part, Turrido is a diminutive and foppish member of high society who made his money through theft, pimping, and fraud. The author does a fantastic job of painting Turrido as a particularly reprehensible villain.

Anyway, Jake is sick of dealing with Turrido’s arrogance and decides to quit his association with the irritating wannabe mobster. This leads to a Chapter One fight with the American beating and humiliating the Sicilian. Turrido swears vengeance on the insolent Jake and dispatches an 18 year-old toady named Angelo to find and kill the man who dishonored him.

Meanwhile, Jake has been banging his newspaper boss’ wife (with all the guilty feelings associated with that) and is trying to end that relationship. So, when an assignment arises to travel to a mountain village where a flood has killed 32 people, Jake jumps at the opportunity to escape the drama of Rome and cover a natural disaster in progress. He hops a train into the flood zone without the knowledge that Angelo the teenage killer is following him close behind. Complicating matters further, his boss’ wife - her name is Grace - also traveled to Piscoli so she could be with her secret lover.

Upon arrival at the town, the rain is still falling in buckets, and the village’s survival is threatened as the aqueducts and bridges become overwhelmed. The author does a nice job interspersing the “disaster movie” segments with the manhunting and relationship drama stuff. There are some great scenes including one in a tunnel that reminded me of the kind of horror that Stephen King would produce decades later.

My one complaint with Rain of Terror was that there are too many subplots. The assassin storyline was great. The love triangle was great. But then we also have an art theft, a 16 year-old waif, a political power struggle in the flooding town, two mid-novel murders to solve and more. Some of these subplots overtake the assassin story and transform the novel into a pretty standard whodunnit. That’s a lot for the hero to deal with as the water is rising, but it’s also a lot for the reader to digest at once in a thin Fawcett Gold Medal paperback. It was a bit like playing whack-a-mole at times

It’s interesting to read a “man on the run from an assassin” book where the motive is an old-country honor killing. It’s also interesting that the assassin is a wet behind the ears teenager trying to prove himself to a loathsome boss. I wish the author had developed that storyline more fully rather than shoehorning in all those competing plotlines.

Despite my quibbles, Rain of Terror is a solidly-good read, and Sanderson was a quality writer who knew how to keep a story moving. This definitely won’t be the last of his novels for me.