The Dark Side of the Island 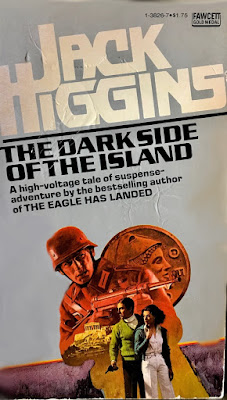 “The Dark Side of the Island” was Jack Higgins' (real name: Henry Patterson) eighth novel, originally published in hardcover by John Long in 1964. After the author's success with “The Eagle Has Landed” (1975), many of Patterson's earlier works were reprinted under the household name of Jack Higgins. “The Dark Side of the Island” was reprinted countless times and remains in print today. My copy is the 1977 Fawcett Gold Medal pictured.

The novel is divided into three separate sections, each showcasing a pivotal point in time for protagonist Hugh Lomax. The first section, “The Long Return”, introduces Englishman Lomax to readers as he docks on the tiny Greek island of Kyros. Lomax's history with Kyros is connected to a perilous mission he undertook as a Special Forces officer in World War 2. After Lomax's recent family tragedy, he wants to find himself again and believes that reconnecting with the islanders will help with the healing.

The first person Lomax finds is his ex-Special Forces partner Alexias Pavlo, a Kyros native who runs a bar called The Little Ship. It is there that Lomax sees a lot of familiar faces that aren't welcoming his arrival. When Alexias sees Lomax, all hell breaks loose and the crowd attempts to gut Lomax like a fish. At knife-point, Alexias explains that Lomax's war mission cost the island years of suffering in concentration camps and killed many of their friends and family. The shocked Lomax is rescued by the sheriff and begins to piece together the events of his past.

This riveting opener is just the tip of the iceberg. Segment two is called “The Nightcomer”, and, as you'd suspect, it showcases the harrowing 48-hour mission in Kyros during the war. It picks up as Lomax and Alexias, aided by Sergeant Boyd, undertake a secret mission in Kyros to destroy a radar station hidden in an old monastery. This is 50-pages of the best men's adventure fiction you'll ever read. Of course the mission is compromised, so the three men are assisted by Alexias' beautiful niece Katina and a famed author named Oliver Van Horn. Without ruining the story for you, let's just say Lomax gains an assist from many of the people that occupied The Little Ship in the opening segment. After all of these years, why would those people now hate Lomax?

“A Sound of Hunting”, the book's closing segment, explains what happened on Kyros after Lomax's covert mission – executions, concentration camps and separation. When the pieces begin to fit, Lomax finds himself a fugitive with his only aid being Katina and a young boy. As the hounds of justice howl, the town's torch lights come closer and closer as Higgins squeezes the narrative into one epic showdown...and absolutely nails it.

There's a handful of men's action-adventure novels that I would consider mandatory for the “deserted on an island” sort of crisis (or fantasy). Ralph Hayes' “The Satan Stone” (1975), Dan Marlowe's “The Name of the Game is Death” (1962) and Donald Hamilton's “Line of Fire” (1955) immediately come to mind, but I'd have to include this novel in the mix. It is a phenomenal piece of literature with one distinct purpose – to entertain the reader. Sometimes we just get caught up in searching for divine meaning or a subversive message to symbolize some sort of real world affair. What I love about this novel, and Higgins in particular, is that it's just action and adventure without an agenda. Nothing more, nothing less. It's an admirable purpose...to entertain the paying consumers. For that, I applaud Higgins' efforts with “The Dark Side of the Island”. This is a mandatory read.