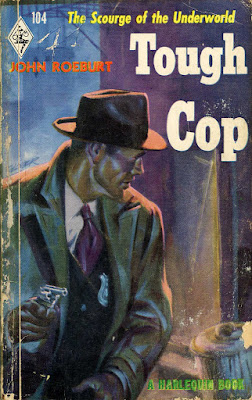 John Roeburt (1909-1972) graduated with a law degree from New York University and worked as a crime reporter for The Brooklyn Eagle newspaper before becoming a successful novelist in the 1940s and 1950s. In 1949, he published the first of two crime novels starring retiring NYPD detective Johnny Devereaux - the first of which was titled Tough Cop and remains in-print today thanks to Wildside Press.

Johnny Devereaux is a top-flight detective with the NYPD who, as the novel opens, is preparing to retire at the ripe old age of 41. He explains to his barber that he’s “tired of being a tough cop in a world of shills, con men, killers, and plain crooks.” Devereaux wants to spend his twilight years reading good books and seeing the world on permanent vacation. Devereaux is no dummy. Before retiring, he wrote a book called “Twenty Years a Cop” that he signs for his admirers when asked. The department even bought him a brand-new Buick convertible to thank Devereaux for his two decades of service to the city. I wasn’t aware that municipalities did that type of thing for civil servants, but that’s why this is a fiction book.

On his way home from his retirement party, a beautiful young woman unexpectedly jumps into his car and asks Devereaux to drive away fast. She claims she’s being pursued by someone and recounts the story of her vaguely-recalled upbringing in which daddy lavished her with unwanted - and inappropriate attention. Because of this and other factors, the girl - her name is Jennifer - doesn’t believe that her father is actually her father. Against his better judgement, Devereaux agrees to help her get to the truth of her own paternity.

Jennifer’s alleged father is a member of New York’s high society and rumored to be a homosexual. Remember this was 1949 before gay people had sitcoms and reality shows depicting their fabulous lives. While running down an initial lead, Devereaux stumbles upon a dead body catapulting this family tree inquiry into a murder investigation.

Devereaux’s authority in Tough Cop exists in a grey area. He’s no longer working as a police officer, but his separation paperwork from the department hasn’t been processed. Basically, he’s serving as an unpaid private eye for Jennifer with the authority - but minimal support - of the NYPD. He enlists the help of an actual private eye, and that character has all the book’s best lines. It’s never entirely clear why Devereaux is going to all this trouble for a girl he hardly knows. Once it became a murder mystery of sorts, wouldn’t it make sense to turn it over to a cop whose not in the process of transitioning off the job?

Overall, Tough Cop is a mostly competent, but very linear, 1940s-style mystery novel. As far as the title goes, Devereaux is not particularly tough compared to his crime fiction cohorts. It’s a pretty forgettable book, and I can think of no reason to seek out the 1955 sequel, The Hollow Man.

Buy a copy of this book HERE.
Posted by Paperback Warrior at 2:00 PM