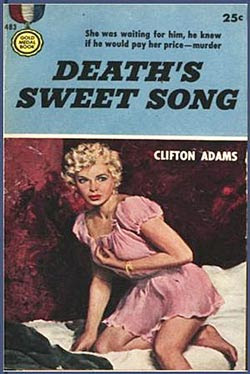 Apparently in the 1950s, American highway motels were often organized as a series of small, stand-alone cabins on a plot of land. For some reason, the cabin-style motel was often used as a setting for hard-boiled crime novels, including “A Ticket to Hell” by Harry Whittington and “Vanishing Ladies” by Richard Marsten (Ed McBain).

“Death’s Sweet Song” by Clifton Adams is a compelling 1953 crime paperback with a dilapidated cabin motel as the setting. Adams was mostly known for his writing in the western genre, but his contemporary hard-boiled crime novels were absolutely top-shelf entertainment, and this one is no exception.

Right off the bat, Adams does a great job of establishing a setting filled with dust and despair. Our narrator, Joe Hooper, owns a super-crappy cabin motel and gas station along Route 66 in rural Oklahoma. No self-respecting tourist would ever stay in Hooper’s unattractive and sweltering cabins in the blistering summer heat. But that’s not the only thing that’s got Hooper down. In addition to the depression of economic failure, he’s also experiencing the malaise of an unenthusiastic relationship with an unremarkable girlfriend. Hooper is a man with a theory: everybody gets one shot in life to make it big, and if you squander that opportunity, there won’t be another. Seething with bitterness over his own failures, Hooper is worried that he either missed his one shot or that it will never come at all.

When the seemingly upscale Sheldons arrive at Hooper’s motel, he is immediately suspicious. Why would a classy guy with a super-hot wife stay in a dusty fleabag? Why is Karl Sheldon lying about having car problems? And why is Paula Sheldon being so flirtatious with Hooper? Some snooping and eavesdropping reveal that the Sheldons are planning a payroll heist in the nearby town. After some proforma ethical waffling, it occurs to Hooper that this heist could be his fabled One Shot to make it big if he can convince the Sheldons to make him a partner in their scheme. The fact that this would entail working closely with the impossibly sexy Paula is an added bonus to the riches that await him now that his potential big break has arrived. But first, Hooper needs to sell Karl on the idea of taking him on as a partner. 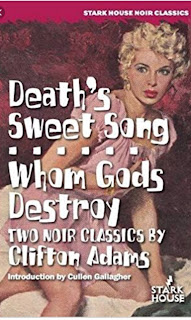 Of course, complications arise, and that’s the fun of these femme fatale short crime novels of the 1950s. Not everyone’s agenda is clearly spelled out, and the honor among thieves is always in question. The author keeps the tension and anxiety high by constantly putting the reader inside Hooper’s inner monologue for the entire 150-pages. There is also a scene of brutal violence like nothing I’ve seen in a novel from the 1950s.

Heist novels are a blast, and this one is no exception. Fans of Richard Stark and Lionel White will be able to sink their teeth into this one as crime fiction comfort food. And thanks to a recent reissue from Stark House - packaged as a double along with “Whom Gods Destroy” - you can enjoy this Clifton Adams paperback without breaking the bank. Highest recommendation.

Posted by Paperback Warrior at 11:38 AM