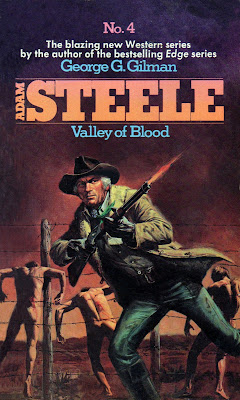 It was the cover art that got me intrigued enough to read this 'Adam Steele' western. For once, the cover is perfectly faithful to a scene in the story--- in fact, it’s the most eye-opening scene in the book--- so let’s take a look.

Our hero has come to a frontier town controlled by a greedy rancher and his henchmen. Four masked hardcases corner Steele one night. We know that these are the same creeps who’d gang-raped the book’s helpless young leading lady a couple of chapters back. Things go badly for Steele at first (he takes a punch to the stomach and a kick in the crotch), until he suddenly produces a three-inch “tie pin.” With it, he swiftly skewers the testicles of one bad guy, whose shrieks of agony distract the others long enough for Steele to get the drop on them. A fast gunfight leaves that trio dead, and Steele blows the head off Punctured Testicle Guy for good measure. Next, he strips all four of the thugs nude and hangs their bodies on a barbed-wire fence before castrating them.

I’ll leave it to others to speculate where the author’s fascination with groin trauma comes from, but the over-the-top violence isn’t a surprise. The book is credited to George G. Gilman, but the author is Terry Harknett, the British pulpster who wrote these 'Adam Steele' books along with the even more brutal 'Edge' westerns. Steele has a bit more humanity than Edge, but that’s not saying much considering what a stone-cold sociopath Edge is, and he shares Edge’s habit of cracking a bad pun at the end of most chapters.

Harknett’s characters exist in a stark spaghetti western landscape. That gives his stories a somewhat different flavor than what you get with conventional westerns by American authors. Tough-guy heroes are nothing new, but in these books the hero has a hard, cold core like an under-baked potato. The same traditional themes of good versus evil are here, but there’s an emotional detachment which makes it hard to really care about anyone, or about what happens to them. That’s just as well, because the author is fond of killing off virtually every named character in a given novel, and it happens here too.

Even the unfortunate leading lady gets killed off, casually and pointlessly. A beautiful young widow who’d helped him earlier in the book, Steele pauses to reflect on why he nevertheless feels nothing for her. “Sorry, ma’am,” he muses, “But I’m looking for the best and you were banged around too much.” Maybe it’s just as well that Steele doesn’t pause for reflection very often.

It all winds up in an action climax, but I found the ending pretty unsatisfying, and apart from the spasms of colorful violence this is a fairly dreary, downbeat book. The pacing is reasonably brisk and I was grateful for the brevity of its 148 pages, but reading “VALLEY OF BLOOD” just isn’t much fun.

Posted by Paperback Warrior at 11:17 AM