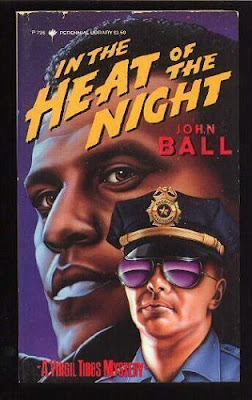 The book begins by introducing readers to Wells, South Carolina. It's the proverbial 1960s Southern small town where they can still smell the Civil War powder burning and probably always will. It's here where young cop Sam Wood patrols the city's streets on the graveyard shift. After a midnight lunch break, Wood discovers a dead body lying in the highway. After notifying police chief Bill Gillespie, Wood is instructed to immediately prowl the area for strangers. In a dark and cavernous train station, Wood finds a black man casually reading a paperback book. After discovering the black man has a wallet of cash, Wood hauls him in as the prime murder suspect.

Perhaps one of Hollywood's most treasured movie quotes is found in the book's fourth chapter - “They call me Mister Tibbs.” After the police question the black man, they learn that he is Virgil Tibbs, a veteran homicide detective from Pasadena, CA. As the narrative tightens, readers learn that Tibbs was trained in martial arts with a specialty in karate, judo and aikido. In addition, he's a veteran of the Pasadena police force, becoming a homicide detective after five years of patrol. It's also hinted that he may have attended an FBI school. Tibbs is a polymath, like Ball's favorite literature hero Sherlock Holmes. He is astute at problem solving with an almost supernatural attention to detail. But in the deep South of the 1960s, Tibbs finds he's in a different world.

As one can imagine, Ball explores the line between racial hostility and small-town justice. After learning that Tibbs is a highly regarded detective, Gillespie asks for his assistance with the corpse. Through character interviews, Tibbs learns more about the case despite the town's opposition that a colored man is leading the investigation. Tibbs, knowing that Gillespie and Wood are both inexperienced, is extremely humble and complacently accepts his role as a victim of racism. This is where Ball absolutely shines as a storyteller. Tibbs doesn't particularly care about the injustice, the racial hostility or Gillespie's browbeating. He's far above all of that, never in the ditch but up on the road. Tibbs is consumed by the murder mystery. Through the book's 150-pages, I don't recall Tibbs stopping for rest. Instead, he ascends to a plane of existence that only contains him, the murdered and the murderer. Thankfully, Ball doesn't make readers rest in this headspace. Instead, he presents the story by centralizing Wood and Gillespie. Readers rarely ride with Tibbs but instead are presented his findings just like Wood and Gillespie.

I'm probably off base here, but for some reason I couldn't help but think of Ross MacDonald's Lew Archer character. Tibbs isn't Archer, but the narrative's twists and turns reminds me of MacDonald's writing style. Or, it could just be that I'm aligning two West-Coast detectives. Nevertheless, In the Heat of the Night is a masterpiece of police procedural fiction. If you are a fan of the film, there are key differences in the novel. The film has Tibbs from Philadelphia, the murdered man as someone quite different and the suspects having different professions and roles. Most notably is that the film version presents Tibbs as an angered individual when faced with racism. As I alluded to earlier, the novel is the opposite. Thankfully, the old adage applies here: The book is better than the movie (or television show).