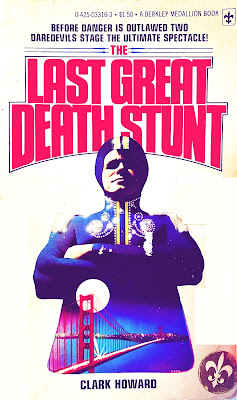 Author Clark Howard was a frequent contributor to the mystery magazine digests including Ellery Queen and Alfred Hitchcock. As a writer, war historian and boxer, Howard's shift into full-length novels often propelled his diverse characters into violent and extreme situations. I've had wonderful experiences with Howard's 1970s novels like The Last Contract and Siberia 10 and find him to be a true unsung hero in the world of men's action-adventure novels. One of Howard's most unusual books is the novel The Last Great Death Stunt. It was originally published by Berkley Medallion in 1977 with a story-line set in the not-too-distant future.

In Howard's premise, the world has evolved into two different political cultures – socialist and communist. Because of this tranquil world peace, people no longer care about winners and losers. Boxing, football, baseball and other popular sports have completely faded away. In this future the world has become obsessed with Death Stunts that feature “athletes” pushing their endurance to the very edge of existence. These fearless few propel themselves as close to death as humanly possible in daring stunts in front of colossal audiences for endorsement money and television payouts. The greatest Death Stunt performer them all? Jerry Fallon.

Almost supernaturally talented, Fallon had the heart, mind and body to perform the most awe-inspiring Death Stunts of all-time. From insane motorcycle jumps and thrilling auto races to the highest of high-wire acts, Fallon left behind a legacy proving he was the greatest of all-time. However, over the last few years, a new competitor has risen to the ranks as a true contender to Fallon's legacy – Nick Bell.

Bell has performed many of the same stunts as Fallon, only more dangerous and extreme to shatter the world's remembrance of Fallon's feats. In spectacular fashion, Fallon is now being called the best ever by the media but he has one more stunt to perform. On New Year's Eve, Fallon has promised the world he'll deliver the last great death stunt. He's taking a 220-foot plunge into the Pacific Ocean...off the Golden Gate Bridge.

In the book's opening chapter, a special report from the U.S. President is broadcast nationwide. On New Year's Day, Death Stunts will be banned across the country. Anyone performing a stunt will risk criminal charges and possible imprisonment. Because of this new law, Bell's promise to perform one more stunt is thrust into the national spotlight. California's law enforcement will barricade the bridge and a special wire mesh is designed to keep anyone from jumping. Fallon's chances of solidifying his daredevil legacy are slim. Can he overcome the authorities and make one last splash at fame and fortune?

At just over 200-pages, Clark Howard has so much to say in The Last Great Death Stunt. To fully appreciate his alternate or future United States one must understand 1970s pop-culture. Flamboyant daredevil Evel Knievel was flirting with disaster while entrancing and captivating Americans with his wild motorcycle stunts. His death defying feats included jumping canyons, rivers and obstacles and even jumping from skyscraper to skyscraper in New York. Knievel was often paid $25,000 per stunt and is recognized alongside Harry Houdini as a truly special performer who risked life and limb for his audience. Howard's idea of the government banning Death Stunts probably arose from an incident wherein state and federal authorities refused Knievel's request to jump the Grand Canyon in 1971.

Howard's novel also possesses a strikingly prophetic tone. In this alternate and not-too-distant future, movie theaters have closed due to theatrical releases now airing on television for nominal fees (pay-per-view didn't even exist at the time of Howard's writing) mirroring the 2021 film industry. Additionally, music concerts don't exist any longer and it's hinted that these performances are similar to the film industry – direct to television for a fee. There are other nuances like automobiles that run on alternative energy, the decline of sports audiences (look at today's NASCAR) and the overall idea of individuals performing solely for endorsement money (like our YouTube stars). While this future is mostly a positive one, there is also a strict rule on childbirth. Parents can only birth one child, a federal regulation that keeps the population manageable.

Beyond the current and future cultural implications, Howard's book makes for compelling fiction. The narrative centralizes around Bell's quest to leap off the Golden Gate Bridge and the political opposition he must face. There's a side story on the U.S. President placing the burden on California's Governor, who then promises San Francisco's Mayor political favor if he can prevent Bell's jump. It's a small portion of the narrative that's filled with some graphic sex and the more seedy side of American politics.

The highlight of The Last Great Death Stunt is Jerry Fallon. Large portions of the story center around Fallon and his family. The narrative showcases Fallon's career highlights and his uneventful retirement into the life of a suburban husband and father. As the press increases coverage of Bell's jump (including a mock of ABC's Live World of Sports), Fallon begins to mentally fragment. The idea of his legacy being erased or tarnished pushes Fallon into intense deliberation – should he try and beat Bell by doing the same stunt? Considering his plush retirement, the narrative tightens to marital disputes between Fallon and his wife April. She's thankful that Fallon survived his dangerous obsession. She doesn't want to relive the fear again. It's Howard's intimate writing that really helps clarify the allure of death and the addiction these performers face. The eternal conflict of cheating death by the thinnest of margins is constant throughout the narrative. It's also the age-old contest of old gunslinger versus the young fast hand. Simply who's better - Jordan or Lebron? Tyson or Jones? Norris or Lee? It's a fascinating comparison that exists every generation.

The Last Great Death Stunt is absolutely superb and once again proves that Clark Howard was an amazing writer. His premise is such an exciting and clever take on what was a pop-culture phenom at the time. Surely Evel Knievel was an inspiration, but Howard's not too distant future is the perfect backdrop for such an unusual tale. There's just so much to like about this novel and it's one that I think I'll probably re-read at some point in the future. Consider this the highest possible recommendation.