Mike Hammer #03 - Vengeance is Mine 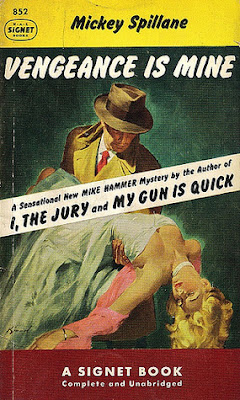 In 1980, the top 15 list of all-time US fiction bestsellers included seven novels by Mickey Spillane. That's a true testament to the power and popularity of Spillane's iconic private-detective, Mike Hammer. As I make my way through Spillane's bibliography, I found that the Mike Hammer debut, I, the Jury (1947) left much to be desired. However, the book's sequel, My Gun is Quick (1950), was nothing short of amazing with its masterful prose soaked with realism, impending doom, and emotional anguish. Appreciating that particular masterpiece, I held off on reading another Mike Hammer novel for over a year. Now, the time has come for the third series installment, Vengeance is Mine. It was originally published in 1950 as a hardcover by E.P. Dutton and has been reprinted countless times in multiple formats.

“The guy was dead as Hell. He lay on the floor in his pajamas with his brains all over the rug and my gun in his hand.”

That's the opener to Vengeance is Mine. Thankfully, the remainder of the book remains just as heavy and unforgiving. Throughout this violent, twisting narrative, Spillane slaps readers with Hammer's hardest case yet, one that pays with redemption instead of cash. The plot concerns Hammer awakening after a night of drinking with his friend, Chester Wheeler, dead. Hammer isn't a murder suspect because the police feel that his friend simply committed suicide. But, Hammer knows he always carried six loads in his gun, and two shots were fired. The circumstances lead to Hammer contending with the DA and using his police ally Pat to find a teardrop in the ocean. Who killed Wheeler?

Hammer's investigation leads through a swamp of political blackmail and conspiracy within the slimy walls of a sin palace called The Bowery. It is here that Hammer meets a sexy dancer named Connie and a bit player named Dinky, an old nemesis that Hammer previously shot. Connecting the dots proves to be difficult considering all roads leading to Chester Wheeler are closed. Anyone involved with Wheeler's past is wearing bullet holes or broken necks. But, Hammer is consistently moving forward as he vengefully fights for his dead friend.

Vengeance is Mine features Hammer's secretary Velda more involved than ever in the investigation. It's also the first novel where she fatally shoots a bad guy. Both Hammer and Velda become more intimate, but Hammer is still plagued by flashbacks and memories of Charlotte Manning, a lover from the series debut, I, the Jury, that he had had to shoot and kill. Like the prior novels, Hammer is also still suffering from PTSD from his war experience. I felt that the emotional baggage added more depth to the character, making Hammer a more dynamic hero when compared to his contemporaries in Johnny Liddell and Mike Shayne.

While not as good as My Gun is Quick, Vengeance is Mine is still an absolute masterpiece and another fine example of Mickey Spillane's extraordinary storytelling. It just doesn't get much better than this. Highly, highly recommended.

Note –  Supposedly, Spillane bet his editor $1,000 that he could write a book that, if the last word was left out, would change everything in the narrative that had happened before. The editor took the bet and lost (credit to author Stephen Mertz for sharing that).