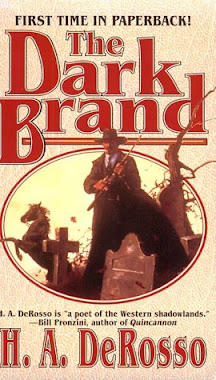 Wisconsin native Henry Andrew DeRosso (1916-1960) should have been a bigger superstar in the world of American Western fiction. His lean and readable novels have one foot firmly planted in the world of hardboiled noir fiction while never forsaking the tropes and traditions of a fast-moving western page-turner. Case in point: DeRosso’s 1963 book, The Dark Brand, a novel that - for reasons unclear to me - never saw a paperback release until 1998.

As the novel opens, cattle thief Dave Driscoll is sitting in jail when he befriends Tenant, the bank robber in the next cell. It’s a short-lived friendship because Tenant is about to be hanged by his neck the following morning. Sheriff Longstreet is visibly frustrated because no one but Tenant knows where the bank robbery proceeds are stashed, and the Sheriff would like to feather his own nest with that money.

Tenant is hanged, and we rejoin Driscoll three years later. He’s rehabilitated and done with his life of crime. On the trail, Driscoll is braced by some hardcases who are convinced that he knows where Tenant stashed the $30,000. Inconveniently, it does not appear that Tenant ever shared his secret with Driscoll. Nevertheless, old friends and new foes are convinced Driscoll is riding with the secret, and everybody wants a taste. Circumstances eventually lead to Driscoll joining the money hunt for his own benevolent reasons.

It’s interesting to note that the western setting of The Dark Brand is pretty incidental. It’s a crime-noir theme that’s been done dozens of times: “Where’s the stolen money stashed?” It just happens to take place in the Wild West, but the dirty cops and duplicitous dames are all rather familiar. And that’s the brilliance of H.A. DeRosso. He’s a western writer for people who may or may not like westerns. His appeal is pretty universal, so I can’t imagine anyone failing to enjoy The Dark Brand.