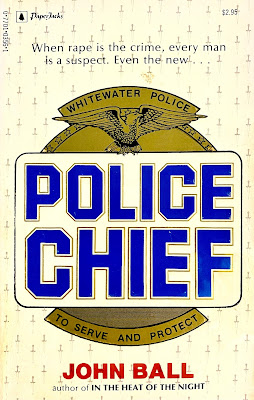 Over the course of four decades, crime-fiction author John Ball (1911-1988) wrote nearly 20 novels. His most critically acclaimed work was 1965's racially-charged In the Heat of the Night. The book introduced a California African-American detective named Virgil Tibbs, a character that Ball would utilize for six more novels through 1986. The novel was adapted to cinema in 1967 (winning an Oscar for Best Picture) and television in 1988. While Ball is mostly known for the Virgil Tibbs character, the author did create another police series as well.

In 1977, Ball's novel Police Chief was published. It introduced a highly-skilled police Sergeant named Jack Tallon who relocates from Pasadena, California to the small town of Whitewater, Washington. Motivating the move is that Tallon accepts a position as the town's Police Chief. The successful book prompted two sequels – 1981's Trouble for Tallon and 1984's Chief Tallon and the S.O.R. My introduction to the author is the first installment of the Jack Tallon trilogy, Police Chief.

The novel's opening chapter is set in South Pasadena as Tallon responds to a gun-store robbery. In just six-pages, the author introduces Tallon as a highly competent, authoritative figure who orchestrates a number of law-enforcement operatives into strategic formations and duties. When the S.W.A.T. Team arrives, Tallon accepts his role as back-up as the second chapter unfolds with a grizzly highway accident that forces Tallon to rescue students from a heavily-damaged bus. As the first on the scene, and with many of the city's police maintaining assistance with the gun-store holdup, Tallon accepts the uncomfortable position of declaring six of the students as deceased. As the night ends, Tallon's wife Jennifer sees her husband exhausted and covered in blood. This imagery leads Tallon and Jennifer to discuss a potential career change.

Over the next couple of chapters, Tallon is invited to the small Pacific-Southwest town of Whitewater, Washington. Despite being a neighbor to the much larger city of Spokane, Whitewater has very little crime. The former Police Chief has retired and Tallon is offered the role. His duties include managing four patrol cars, one detective, a Sergeant and five uniformed officers. At first, the lack of daily action and danger plagues Tallon and prompts him to rethink his one-year contract. But, in just a few weeks Whitewater is rocked by a serial rapist and a pipeline of heroin.

There's no doubt that author John Ball had a real gift of storytelling. I was really invested in the opening chapter and couldn't wait to learn how Tallon was going to assist in the store hold-up. After that entire scene is left dangling and unfinished, I was furious that Tallon had to leave the gun-action to assist with a highway collision. Most authors can't make that quick of a transition, and even fewer can maintain the reader's interest and attention after the fast scene change. But, I quickly realized that the author was plotting with a purpose. This was a calculated move that shifts all of the attention to the main character. Readers had to experience the turbulent night-life of Tallon, the daring “quick to respond” nature of the police business that puts law-enforcement in various precarious situations – sometimes within the same half-hour time-frame.

After building his character's cop credibility, Tallon trains his staff on modern tactics despite their belief that any of it is needed. When the serial rapist begins attacking the town's most beautiful women, Tallon orchestrates a sting operation that places a beautiful young nurse as bait for the rapist. Further, the staff must contend with high-speed chases and fights as a heroin operation comes to fruition on Whitewater's small-town streets and local college campus. The story is that many of the town's citizens feel that crime has increased only because the new Police Chief is involved. They suspect their new Chief is actually the rapist, placing a point of contention between Tallon and the people he has sworn to protect.

I absolutely loved this book and instantly liked the character of Jack Tallon. Once the book settles into the procedural investigation of rape and drug trafficking, I felt that Ball's storytelling was similar to that of Ed McBain's 87th Precinct series. With just a handful of officers, the entire investigation was a more intimate experience told through the activities of these men. While the book isn't terribly violent, the two furious car-chase scenes were some of the best I've read. Also, the rapes themselves aren't in the narrative (thankfully), but the grizzly details are presented through the eye-witness accounts. In that regard, Ball used the expertise of Cheney, Washington's law-enforcement agencies to better understand these investigations. I think that realism propelled the story-line in a positive way.

Police Chief is still in print today and my copy was the affordable 1985 paperback version published by Canada's Paperjacks imprint. I'm already shopping for the two sequels so I can immerse myself back into Whitewater's small-town atmosphere. If you love the police procedural sub-genre of crime-fiction, I highly recommend this author and this lesser-known short series.