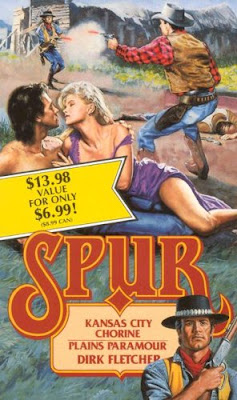 'Spur' was a long-running adult western series that ran for 40+ books. The main character is Spur McCoy, a former Union Captain and now an early agent of the U.S. Secret Service. He works out of the St. Louis office and accepts assignments for any crimes west of the Mississippi River. The series can be read in any order and author Dirk Fletcher was veteran writer Chet Cunningham ('Canyon O'Grady', 'Avenger', 'Jim Steel'). Entry #28 is “Kansas City Chorine”, published December, 1993.

The book finds a wrongdoer named Jack T. Galde pulling bank jobs across the Kansas prarie. His methods are fairly elementary – establishing an identity in the small town, then robbing the bank before blowing it up. His destination is simply the next town so he can pull the heist all over again. After Galde's five robberies and a handful of murders, Spur is assigned the case.

The narrative places Spur in the same town as Galde's next heist. The lady of the night is the Kansas City Chorine herself, Patrice, whom Spur beds in four explicit scenes. Besides that action, Spur just sort of meanders around town long enough to locate the hotel room Galde is residing in. Oddly, instead of just arresting him there, he sleuths around town hoping to find the man. He wastes too much time and finds that Galde, using a preacher's identity, has robbed the bank, a widow and stolen Patrice. The hunt is on as an incompetent Spur battles a tornado to find his woman.

I've read two Spur novels, this one and “#15 Hang Spur McCoy!”. I might speculate that as the series continued the quality diminished. This book was just lethargic and lousy for all of the reasons I listed above. I might try another Spur title later on but this one has put the series on the back burner of my neighbor's stove. I'm done for now.

Buy a copy of the book HERE
Posted by Paperback Warrior at 6:00 AM