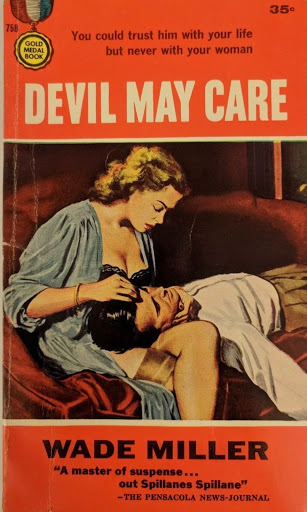 Childhood friends Robert Wade and H. Bill Miller were responsible for the most successful collaboration in vintage genre fiction. Together they wrote around 33 novels under the Wade Miller and Whit Masterson pseudonyms selling around 15 million copies of their mystery and adventure paperbacks. Many have said that their finest work is their eighth book, Devil May Care from 1950, recently reprinted by Stark House as a double paired with Sinner Take All from 1960.

The hero of Devil May Care is Biggo Venn, a fortysomething soldier of fortune working the speaking circuit for $50 per gig telling globetrotting adventure stories to meeting hall audiences. After a speech in Cleveland, Biggo reconnects with his old friend with a business proposition for the aging mercenary.

The feds deported a Sicilian mobster named Tom Jaccalone who is now living comfortably in Mexico. Biggo is hired to deliver a letter to the mobster that will exonerate him and allow Jaccalone to return to the U.S. legally and resume his racketeering. The letter is a signed confession from someone else admitting to the crime that caused Jaccalone to be deported from the U.S. The gangster is willing to pay $20,000 to get his hands on the letter, and Biggo just needs to deliver the confession to Mexico and earn some easy cash. Of course, Biggo accepts the gig.

The action shifts to Mexico, and the mission turns out to be more complicated than originally represented. Biggo’s point-of-contact for the exchange is murdered. It seems the mobster who took over Jaccalone’s U.S. rackets following his deportation isn’t excited about the prospect of a possible exoneration and repatriation resulting from Biggo’s delivery. This leaves Biggo in Mexico caught in the crossfire between two rival gangsters - both of whom want the letter Biggo is carrying. One has $20,000 for Biggo, and the other has a bullet with his name on it.

In Mexico, Biggo falls in with an impossibly sexy bar hostess named Jinny. There’s also a local Mexican torch-singer that Biggo wants who seems to run the town. Whether these women are friends or foes is a twisty question as the plot develops. Meanwhile, a rival mercenary from Biggo’s past also surfaces in the same Mexican town on the Baja Peninsula to repeatedly throw a monkey wrench in Biggo’s plans.

Overall, Devil May Care is a fine novel. Some of the treatment of the fictional women in the paperback would never fly today, so consider yourself warned if that type of thing bothers you. It’s also a bit padded and slow in the middle section as Biggo hangs around Mexico becoming involved in relationships while waiting to make contact with his buyer.

But once the climactic ending begins, things get great very quickly with lots of cool plot twists and turns. Overall, I’m sure you’re going to like Devil May Care quite a bit, and I completely understand why many say it’s the strongest Wade Miller release. Recommended.

Devil May Care was the 9th novel published by the legendary Fawcett Gold Medal paperback imprint. The book never had a second life after multiple Gold Medal printings throughout the 1950s, so the Stark House reprint is a big deal. Buy a copy HERE.