Monster From Out of Time 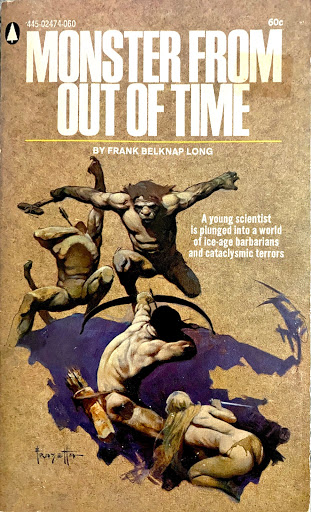 Bram Stoker Award winner Frank Belknap Long (1901-1994) was part of the “Lovecraft Circle” of fantasy writers that included contemporaries like Robert Bloch, Robert E. Howard and Clark Ashton Smith. While primarily focusing on horror and science-fiction, Long also authored a number of fantasy and adventure novels. My first experience with the author is his fantasy novel Monster From Out of Time, published by Popular Library in 1970 with cover art by the famed Frank Frazetta.

In the book's prologue, an engineer named Ames is working a construction zone on a shoreline in Mexico. A young woman named Tlacha is watching the man's labor when a ravine opens in the ground and seemingly swallows Ames in a blinding light. Hoping to retrieve Ames, the young woman is enveloped by the light and disappears.

In Chapter One, this same catastrophic event happens again, only to a scientist named Dorman and his girlfriend Joan. The two are sunbathing on the coast when they witness a large underwater behemoth rise from the depths. Hoping to identity the creature, Dorman and Joan are swallowed by the light and find themselves deposited in a strange place surrounded by ice and snow. After nearly freezing to death, the two eventually find Ames and Tlacha and the couples share their stories and improvise a plan to survive.

Monster From Out of Time is clearly influenced by Edgar Rice Burroughs' Barsoom series. It follows the proverbial “fish out of water” concept of the average person thrust through time into another world. The concept typically features a central survival element that ascends into an exploratory adventure for the traveler. Long utilizes that same idea for the four main characters. Instead of another world or planet, the location is the Ice Age.

From my research, the general consensus is that Monster From Out of Time isn't a fair representation of Long's literary skills. In fact, many people disliked the novel and found it saturated with dialogue. At 127-pages, I would nearly agree. There is some action, loosely depicted on the cover, but it comes near the very end of the lean paperback. The characters are just average, and the narrative is a slow-burn.

If you collect these types of stories, or just want this for the artwork, I totally get it. For me, I'm more focused on the book's content, and this book just wasn't very good. If someone has a better suggestion for Long's fantasy novels, I'm all ears.