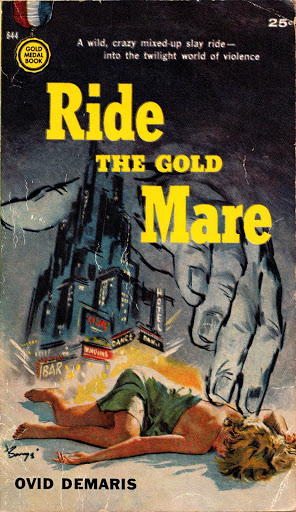 While spending a majority of his career penning non-fiction, Ovid Demaris authored a number of crime-fiction novels. While I've had mixed reactions to Demaris' literary work, I enjoyed his 1959 novel The Long Night. Hoping for another positive reading experience, I read the author's first novel, Ride the Gold Mare, published by Fawcett Gold Medal in 1957 and reprinted by Cutting Edge Books in 2020.

The book stars Phil Lambert, a tenacious Hollywood reporter whose focus is the city's deadly heroin distribution network. In the novel's opening pages, a crooked cop named Fusco violently kills a drug pusher. The murder is witnessed by two druggies who flee the scene of the crime. Lambert learns of the murder and suspects that Fusco may be tied to the Syndicate. In an effort to break the story, Lambert tries to stay ahead of Fusco in learning the whereabouts of the two witnesses.

At this early career stage, Demaris was clearly influenced by Jim Thompson's writing style. Ride the Gold Mare is saturated with characters who remain rough around the edges and undesirable. Weepy and Doris, for example, are both losers who never stray far from the gutter begging for drug money. There's a stripper longing for love, a wife begging for faithfulness, a dealer skimming off the top and an average man positioned on the brink of the vast criminal underworld.

Much of the narrative focuses on the aforementioned Sergeant Vince Fusco of the Los Angeles Narcotics Squad. In essence, he is the consummate villain, a narcissistic dirty cop who clashes with the public he’s sworn to serve. In many ways, he's the prototype for the sadistic mob killer that Demaris would later create and utilize for his 1960 novel The Enforcer.

Among the miscreants, delinquents, hookers and dealers, the cast of characters is bleak, created with a sense of depravity by the author. The narrative is littered with profanity, drug use and sexual aggression that is somewhat uncommon for a 1957 Gold Medal paperback. Like John D. MacDonald's 1960 novel The End of the Night, Ovid Demaris' Ride the Gold Mare is a brutal look at youth gone wild with no safety barriers or censorship. It's an epic, violent clash between lawbreakers that swirls into a compelling, fast-moving crime-noir read from beginning to end. The book is a fantastic first-effort from an author who simply excelled in this genre.

Note - Ride the Gold Mare is also part of a four-book compilation entitled California Crime. The omnibus is available from Cutting Edge and features three other crime-noir novels authored by Demaris - The Enforcer, The Long Night and The Hoods Take Over.