The Crooked Circle (Too Many Murderers) 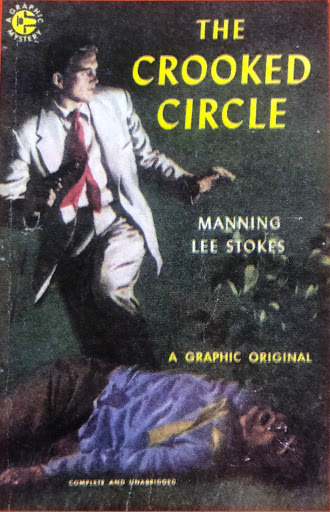 Before writing house-name adventure paperbacks in popular series titles including The Aquanauts, Nick Carter: Killmaster, John Eagle: Expeditor and Richard Blade, author Manning Lee Stokes (1911-1976) was already successful in a variety of genres. In 1951, Graphic Books published his paperback original crime novel titled The Crooked Circle, and the book was re-released by the same publisher as Too Many Murderers in 1955. The novel has found new life as a modern trade paperback from Oregon publisher Armchair Fiction.

Our narrator is a 40 year-old, rather unsuccessful ex-cop turned private eye named Steve Paget in fictional Steel City, USA (think Cleveland or Pittsburgh). Against all odds, Steve lands a new client, an eccentric rich guy named Jeff Torrance, who wants to pay Steve good money to have sex with Torrance’s pretty and long-legged wife. I won’t spoil the reason behind this indecent proposal, but after some in initial resistance, Steve agrees to the undercover seduction for a $100,000 fee. Business is business after all, and Mrs. Torrance is a tasty little dish.

Along the way, Steve gets beaten with a wrench and must contend with a dead body that could derail his future plans. Most of the action in the novel’s second half takes place on a remote estate where Steve is pretending to be a guest of the Torrance family looking for an opportunity to seduce the lady of the house and complete his mission. There are long stretches in the paperback where not much happens, and Steve fails to have enough charisma to fully carry the story devoid of any action.

Things pick up quite a bit as we near the climax and the double-crossing gamesmanship among the cast escalates. A murder plot is hatched that becomes a somewhat brilliant and cinematic set piece worth the wait. The Crooked Circle was a decent novel but nothing special until the satisfying ending. It’s interesting to read Stokes’ work before he became a go-to series-novel hired hand. If you can stand some uneven pacing at the paperback’s midsection, the reward at the end is pretty great.