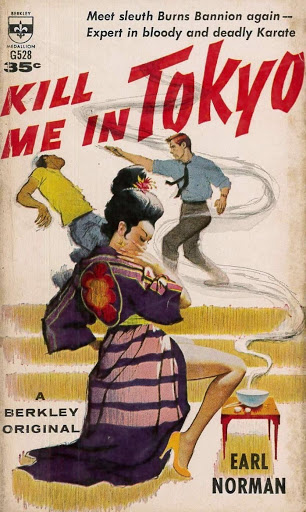 The Burns Bannion series about a Karate-loving American private eye in Japan lasted for eight installments between 1958 and 1967. The author was listed as Earl Norman, a pseudonym for Norman Thomson, who actually lived in Japan during the American occupation following WW2. The first installment in the Burns Bannion series, 1958’s Kill Me in Tokyo, has been reprinted as an ebook by an enterprising outfit called Fiction Hunter Press.

Bannion is an enjoyable and conversational narrator guiding the reader through this fun adventure. As the novel opens, he explains to the reader his experience as a karate student in Japan. Remember that in 1958, Karate was something new and exotic to Americans providing today’s readers an interesting perspective from the future. Bannion is fresh out of the U.S. Army and disinclined to leave Tokyo - mostly because he’s got a hankering for Asian chicks, particularly a stripper named Princess Jade.

One night at the nudie bar, an American drunk mistakes Bannion for a private eye and hires him to find his lost love, a girl named Mitsuko. The money is good and Bannion is pretty well-connected in Tokyo, so he rolls with it. His transformation into becoming a private eye is guided by stereotypes of fictional gumshoes. He knows he needs to get a trench coat and a weapon, for example. Guns being illegal in 1958 Japan, Bannion opts for his karate hands. The author was clearly having some fun within the tropes of the hardboiled PI genre. There’s even a reference to a private eye in Los Angeles with short white hair and a broken nose that’s clearly a shout-out to Richard Prather’s Shell Scott.

Norman also avoids the temptation to make his novel a Fodor’s Guide to 1958 Tokyo despite clearly having a keen insider’s view of the city. There’s just enough local flavor to keep the setting interesting without boring you with National Geographic details as Bannion searches for the missing Japanese girl dodging karate kicking killers along the way.

I loved this book. The plot wasn’t amazing or innovative, but it was well-written and a helluva lot of fun. Bannion is a great companion, and nearly every chapter has him either kicking ass or getting his ass kicked in martial arts fights while bedding down Asian women along the path to a solution. Copies of the Bannion books are pretty scarce in the wild, so I’m really hoping that Fiction Hunter Press makes some dough on this first installment, so they can digitize the other books in the series.