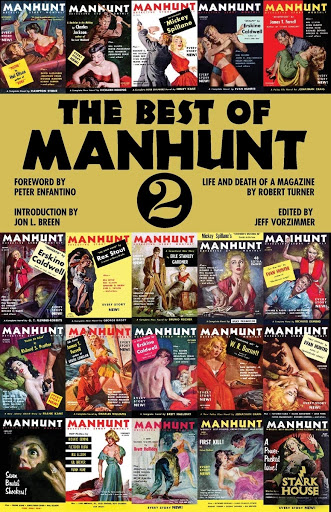 In 2019, Stark House Press generated a commercial and critical hit with the release of The Best of Manhunt, an anthology of stories from the legendary 1950s crime fiction digest. Knowing a good thing when they see it, the reprint publisher has compiled a second volume of blood-on-the-knuckles tales from the popular magazine’s heyday for an August 2020 release.

By way of background, Manhunt began publishing in January 1953 capitalizing on the success of a new breed of hardboiled authors with Mickey Spillane leading the pack supported by muscular authors including Evan Hunter and David Goodis willing to make five cents per word for their stories. While the magazine’s run stretched into 1967, everyone knows that the publication largely lost its way by the mid-1960s. As such, the new anthology front-loads the content with stories primarily form the 1950s.

Before the stories, the reader is treated to a series of essays about Manhunt Magazine by scholars Peter Enfantino, Jon L. Breen, and Robert Turner followed by over 400 pages of twisted, violent short fiction. Anthology editor Jeff Vorzimmer intentionally sought out many “deep tracks” from the magazine’s history choosing many authors who never achieved paperback stardom. There’s a lot to enjoy in stories by John M. Sitan, Roy Carroll, and Glenn Canary who share the pages with heavy hitters including Bruno Fischer, Donald E. Westlake, and Erle Stanley Gardner.

Reviewing an anthology is always a challenging task - particularly in a literary buffet filled to the brim with this much quality. Here are some thoughts regarding a handful of noteworthy stories in the collection:

As I Lay Dead by Fletcher Flora (February 1953)

Fletcher Flora brings the reader a perverse and twisted little tale. Cousins Tony and Cindy work each other into a sexual lather while oiling each other’s skin on the man-made beach. Meanwhile, their wealthy, fat grandpa floats in the lake nearby. It occurs to the lusty twins that if something happened to grandpa, they’d be free - and financially-set - to run away to Acapulco together where the booze, sun and screwing never stops.

Flora’s novels are often tinged with a heavy dose of non-graphic sexuality, and “As I Lay Dead” amplifies that aspect of this writing. Murder, blackmail, and double-crosses are also on the menu making for a perfect story. Whatever you do, don’t skip this one. It’s everything that dark crime fiction should be. With over 160 published short stories to his name, I can’t help but think this might be his best magazine work.

Roy Carroll was a pseudonym for Robert Turner, a short story guy who started in the pulp magazines. His literary agent was Scott Merideth, who curated a lot of the talent that appeared in Manhunt. It was at Merideth’s urging that Turner shifted his style from over-the-top pulp writing to the gritty and realistic crime digest format.

“Shakedown” is narrated by Van who has just knocked up a chick at work and has no intention of doing the right thing by the poor girl. He comes up with the idea that she should bang their boss, pin the pregnancy on him, and be set for life as the old man’s wife.

As you can imagine, the plan goes very wrong when the boss doesn’t take kindly to being shaken down by a knocked-up employee in his typing pool. If you can handle some 1950s misogyny with your crime fiction, you’re going to enjoy this one just fine.

I could find next to nothing about author F.J. Smith other than the fact that several of his stories appeared in various Alfred Hitchcock anthologies. “One More Mile to Go” is a rare third-person narration from the pages of Manhunt. A small-town Louisiana shopkeeper strangles his nagging wife in her sleep and needs to hide the body somewhere (a recurring theme in Manhunt).

Along the way to the body stash site, he’s pulled over by a state trooper, and the interaction feeds the tension of the situation. It’s a good, simple story. Nothing revelatory, but certainly not a waste of your time.

The Geniuses by Max Franklin (June 1957)

Richard Deming is the only author to appear twice in the anthology with one story under his own name and this one under his Max Franklin pseudonym. “The Geniuses” is about two teenage thrill-killers long before murderous youth was a regular occurrence in American life.

Bart and Edward are high-IQ college kids who find themselves to be social pariahs among their campus peers. A conversation about how one might craft the perfect murder takes a nefarious turn when they begin experimenting with these ideas on a classmate. It begins as an intellectual exercise and then becomes deadly real high-wire act. Under any name, Deming is a solid talent and was rightfully among the bedrock of the Manhunt talent pool.

Mark Mallory was a pseudonym for Morris Hershman who did a lot of writing in the mid-20th Century in the science fiction, war and crime genres. He was also a regular contributor to Mike Shayne Mystery Magazine.

“Girl Friend” is a diabolical little story told as an interrogation transcript of a 14 year-old girl accused of murder. As the story unfolds, the kid appears to be the daughter of a prostitute pressed into service herself. Her mom would command top dollar for the girl by telling the clients she was a twelve year-old virgin. As the nightmare narrative shifts into a murder confession, the brilliance of this nasty little story really takes shape. Despite the disturbing set-up, don’t skip this gem.

Wade Miller was the popular collaboration of Robert Wade and Bill Miller that produced so many outstanding crime and adventure novels in the paperback original era. “Midnight Caller” is a short-short story - only two pages long - about a woman being menaced by a sexually-aggressive intruder in her bedroom. It’s a tense little story with a fun punch line at the end.

The Best of Manhunt 2 is another masterpiece of short fiction that will be an essential part of any hardboiled library. I’m hoping that it’s another monster success for Stark House to justify more volumes in the future. Highly recommended.