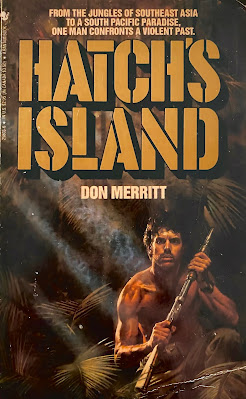 Author Don Merritt (real name Donigan), born in 1945, worked as a scuba diver, fishing boat captain and sailing instructor. After obtaining a degree in Creative Writing from the University of Iowa, Merritt published his first novel, One Easy Piece, in 1981. The suspenseful thriller was the first of seven total novels the author has written. Typically his books fall into a "romantic, suspenseful tragedy" and oddly that's where his three-book series of Hatch novels lies. Hatch's Island (1986), Hatch's Conspiracy (1987 and Hatch's Mission (1987) form a short-lived series of action-adventure novels published by Bantam. After acquiring all three books recently, I decided to take the plunge to see what Hatch is all about.

The book's prologue introduces the reader to protagonist Captain Franklin Jefferson Hatcher. In it, “Hatch” is serving in the U.S. Army's Special Forces in the jungle highlands of Laos. While it's never really clear what the group is doing, Hatch and company live with a small village where some combatants bed down the young women. Hatch has fallen in love with a young woman named Mai and the two are expecting a child. While he's out on patrol, guerrilla fighters ambush the team and Hatch is shot repeatedly and left for dead. The enemy then converges on the village and kills everyone in heinous fashion. Hatch crawls back to the village to find that Mai has undergone a terrible surgery where a rat has been fatally inserted into her womb.

The book then fast-forwards 15-years where readers learn that Hatch quit the Army and went AWOL in 1965. To escape U.S. intelligence, Hatch is now living as a quiet hermit on the tiny fictitious island of Tuva in the South Pacific. Despite Bantam's action-oriented book cover, Hatch has long gray and black hair with an equally long beard. He's spent the last 10-years living in a run-down warehouse where he stores his emptied whiskey bottles, fishes and generally trades things like shovels for boat propellers. The idea that Hatch is the Rambo-type action hero from the front of this book cover is terribly misleading.

While walking through the jungle, Hatch stumbles upon a 17-year old girl named Kukana being raped by an unknown man. After threatening the man with a knife, the girl runs back home to notify her father, the island's pseudo-mayor. After walking the man through the jungle at knife-point, Hatch is ambushed by two other men and they break a bunch of bones and leave him for dead for the second time in this book. Although it's never explained, the three men are arrested and locked up. Later, Kukana's father takes the men far into the ocean in their own boat and drops them with the instructions that a three-day swim will get them to the next island.

The middle portion of the novel focuses on Hatch's healing and Kukana's overwhelming passion for her newfound hero. In total dedication to the island's warrior and savior, the whole town builds Hatch a new house and awards him the fishing ketch that his three attackers previously owned. Further, due to Hatch's courage and fighting prowess, they want to make Hatch the island's sole police force and give him the 17-year old Kukana as a wife. Hatch repeatedly says no, but eventually caves to the pressures of the new boat and house. And the girl.

I'm not spoiling anything for you. The last third of the book circles back to Hatch's attackers and connects them to a mercenary force that may know Hatch's identity from the war. Further, they may or may not be the same people that raped and killed his lover Mai years ago. They may or may not inform the Pentagon that they have found the missing Hatch who was feared dead. The book's plot lines eventually intersect which brings about the book's explosive narrative and eventual fiery finale.

If you haven't figured it out by now, I didn't like this novel. Perhaps if the book cover had depicted a old long-haired man walking along the beach with a boat propeller I would have been pleasantly surprised with the action. Instead, I bought an action novel and was unpleasantly surprised that it's mostly a crafty, suspenseful (albeit violent) love story. Hatch is rather one-dimensional and the only characters that I enjoyed reading about were the three criminals. The book's ending and connections to the Pentagon left me a little curious as to where the next book takes readers. For that reason alone I might courageously take a peek at Hatch #2’s opening chapters hopeful for a better book. In the meantime, I'm drifting as far as I can from Hatch's Island.