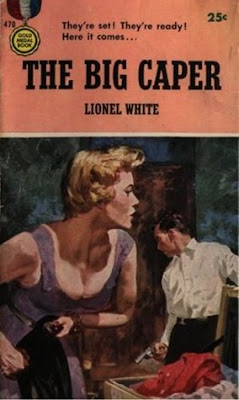 Lionel White was a master storyteller who specialized in heist crime-noir. Several of his novels have been made into movies starring the likes of Marlon Brando and Glenn Ford. Director Quentin Tarantino credited White’s work as inspiration for his critically-acclaimed 1992 film Reservoir Dogs. I've been thrilled with every novel I've read by this author and I was excited to read what many consider one of his finest works, The Big Caper. It was published by Fawcett Gold Medal in 1955 and adapted for film in 1957.

The book stars a WW2 veteran named Frank who finds himself befriended by a crafty bank robber named Flood. One thing leads to another and Flood eventually proposes his boldest scheme to Frank. The idea is that a professional heist crew, featuring an arsonist, a safe-breaker, two drivers and two gunmen, will rob a large bank in the small Florida town of Indio Beach. The millions will be split up and this triumphant caper will be Frank's first (and hopefully only) criminal foray and Flood's last. But, like any good ol’ fashioned bank blow-out, there's a wrench in the gears that proves to be a fatal flaw: Flood's girlfriend Kay.

Flood's proposal is that Frank and Kay become merry citizens of Indio Beach months before the heist. The two are to fake it as a married couple and submerge themselves into American Suburbia. Frank opens a thriving gas station where he smiles and pumps gas and fixes the town's auto problems. Kay is the proverbial happy housewife and makes plenty of canasta and bridge club dates with the couple's friends. After a few months of successful socializing and law-abiding living, Frank and Kay learn to fake it so well that the whole farce becomes reality. The two fall in love with each other and begin questioning their motives to gain happiness through a criminal enterprise. In a clever twist, White asks readers to ponder the real definition of happiness. Kay grows to fear and despise the controlling Flood, and Frank becomes wary of the plan and its proper execution. The Big Caper spirals into a character study of everyday people placed into a viper's den of greed and criminal exploits - the very essence of crime-noir.

White's narrative settles into a routine, customary tour of small town life in the book's opening half. The storytelling is key with the author providing many vivid images of this tiny Florida community. There's an ensemble cast of characters that are supportive of Frank and Kay's role as happily married do-gooders. But, once the professional criminals hit town, the novel's second half becomes a ticking time-bomb as Frank and Kay countdown to their date with destiny. White is willing and patient to deliver the goods, but he primes readers with a plethora of possibilities on which directions Frank and Kay turn. It is this nervous anticipation that makes The Big Caper such an entertaining and pleasurable reading experience.

I just can't say enough good things about this author and his stellar body of work. What a remarkable legacy to leave behind for generations of readers to enjoy and celebrate. When compared to Lionel White's contemporaries, this author remains in the very top echelon of mid-20th Century crime-noir creators.

Note – Dan J. Marlowe borrowed this novel's plot for his equally entertaining 1966 novel Four for the Money. In it, a former card-sharp and ex-convict migrates to a small Nevada town and integrates himself into the community. He awaits the professional heist crew who he plans to assist in knocking over the town's casino for millions. But, he finds that his pleasurable small town life, and lover, might override his need for crime.