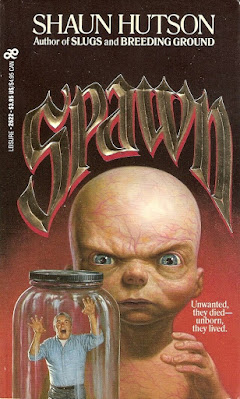 British horror author Shaun Hutson’s writing career took off in 1982 with the publication of his iconic paperback Slugs (yes, it’s about shell-free killer gastropod mollusks). He found his niche as a great storyteller who can weave a compelling suspense story out of a crazy, gross-out premise. Case in point: his 1983 novel Spawn. Granted, it’s about murderous aborted fetuses, but the novel is also so much more. Read on...

It’s 1946 in Great Britain and Harold - the son of a prostitute - is a seriously messed-up kid. At age 14, he occupies his time giggling as he tortures insects with fire. This harmful diversion leads to the fiery death of Harold’s family leaving the boy grotesquely deformed without a person in the world who cares about him.

We rejoin Harold in 1982 where he has been a resident of a mental institution undergoing intense psychological and physical therapy for over 35 years. He’s sweet, shy, polite and severely scarred. His dilapidated asylum is closing, and it’s time for Harold to rejoin society. He’s hired as a janitor at a local hospital. The facility has basement pathology lab where the giant furnace incinerates the body parts, organic materials, and aborted fetuses from various medical procedures.

The sight of a fetus in the incinerator brings back some awful memories for Harold as he recalls his baby brother’s death by fire. Harold begins swiping the pre-babies and burying them near the hospital, so they don’t suffer the indignity of the consuming fires. The means by which Harold’s fetus friends are eventually reanimated wasn’t particularly realistic, but I can’t imagine a situation where that result would seem reasonable.

Meanwhile, a violent murderer named Harvey has escaped from a rural prison where he spent most of his time in solitary confinement. Two smart police inspectors are heading up the manhunt in hopes of catching the maniac before the body count mounts. This subplot was interesting enough, but the eventual link to Harold and his fetus gang was fairly inconsequential.

Spawn is a fun and bloody bit of escapism, but there’s also some interesting themes running through the narrative. The first is that the human monsters who walk among us are made through childhood abuse and neglect.

The author also seems to be saying something about the personhood of the unborn, but Spawn never feels like a political or religious pro-life parable. Upon reflection, I’m not sure that either side of the debate wants to claim Harold’s zombie abortions as their own. Still, it’s hard not to notice.

As a novel, Spawn is an entertaining gross-out paperback. You’ll cringe and squirm, but it’s unlikely you’ll actually be frightened. However, you’re also unlikely to put the paperback down because it’s well-written and compelling as Hell. You’ll want to see what Huston is going to do next. By now, you probably know if you like this type of thing. If so, you’re certain to enjoy this bloody ride.

Posted by Paperback Warrior at 8:00 AM