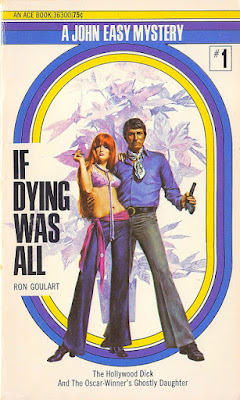 Pop-culture historian and multi-genre author Ron Goulart wrote four novels and three short stories starring a swinging Hollywood private eye named John Easy in the 1970s. Thanks to Mysterious Press, the novels remain in print today, so I’m starting the series with the first installment, If Dying Was All, from 1971.

An Oscar-winning screenwriter named Mr. McCleary hires Easy to solve a family mystery. The client’s daughter Jackie committed suicide by jumping into the Pacific Ocean five years ago, yet Mr. McCleary just received a letter from the girl. Fortunately for the plot, Jackie’s body was never recovered. In the letter, Jackie says she’s in trouble, but she can’t come into the open just yet. Jackie drops a lot of inside info, and the handwriting looks right. Convinced that his twentysomething daughter is alive and in trouble, the old man hires Easy to find Jackie.

Easy isn’t convinced Jackie is alive, but he follows logical leads - gossipy news clippings, the post-office, her friend-group, etc. This brings him in the orbit of many quirky California types, but Easy is himself is rather generic. In fact, he makes fictional detectives like Mike Shayne and Johnny Liddell seem downright charismatic in comparison. Instead of imbuing Easy with personality, Goulart chooses to make him a competent professional among scads of California stereotypes (“The classical string quartet at the cafe is nude!”).

Man, this was a by-the-numbers tedious and boring book. It’s possible that Goulart was trying to lampoon the private eye genre, but he forgot to actually make it funny. Characters do wacky California things like grab Easy’s crotch while he’s interviewing them, but these attempts at promiscuous edginess fell flat to me. The entire novel is just a series of interviews Easy conducts with witnesses and possible suspects who may have knowledge of Jackie’s death or disappearance. By the time we arrive at a solution to the central mystery, I was way past caring.

If any of this sounds like your thing, please just read any of the Carter Brown mysteries. He did the same thing so much better. If Dying Was All isn’t even bad enough to be noteworthy. The novel is blessedly short, so you won’t need to suffer through much tedium to reach the ending. Better idea: just skip it altogether.

Buy a copy of this book (if you must) HERE