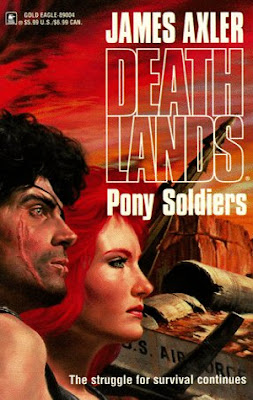 Laurence James wrote a number of successful western titles like Crow, Apache and Gunslinger in the 1970s and 1980s. His violent narration provided a raw and gravelly texture to the monomyth threads of western vengeance. From that aspect, I was curious to read the author's combination of post-apocalyptic and western genres with Deathlands' sixth installment Pony Soldiers, originally published by Gold Eagle in May of 1988.

In the last installment of the series, Homeward Bound, the original tale of Ryan Cawdor was revealed, including the final details of that story arc. After the action stopped in Virginia, the band returned to the northeast to enter the New York redoubt. Like prior novels, the heroes battle mutants before making a jump through the gate and return to a familiar place - the Alaskan redoubt featured in the series second entry Red Holocaust. In these opening chapters, Jak is hurt by a mutant animal.

Instead of staying in the Alaska location, the group choose to pursue another adventure and re-entered the redoubt. This time, they emerge in a hot, dusty desert somewhere in what was originally the southwest United States. After seeing corpses of 1800's U.S. Cavalry soldiers, Doc becomes concerned that the group has somehow made a leap back through time to the late nineteenth century. Thankfully, we realize that isn't the case. Instead, the heroes fall into a familiar scenario - warlike factions fighting for territory, supplies and superiority.

In a rather clever twist, the heroes, including the dying Jak, face off against "Pony Soldiers" led by a blonde haired maniac that may or may not be the historically famous General George C. Custer. During a firefight, Cawdor and the group are assisted by a tribe of Apache warriors led by Cuchillo Oro. Cawdor discovers that the Pony Soldiers could be involved with an old enemy, Cort Strasser. Together, the Apache warriors and the Cawdor group combine their forces to destroy the deranged and often sadistic Pony Soldiers.

As I mentioned earlier, James has a lot of fun with this book and turns it into a violent western novel similar to the titles he was writing in the 1970s. Macabre torture devices, dissection, crucifixions and the usual assortment of barbaric crimes used throughout this novel are all staples of his 1970s style of writing. In fact, fellow British author Terry Harknett’s hero Edge is quoted as a legend in the region. In addition, the name Cuchillo Oro may be familiar to fans of the Apache series from James. In this series, which began in 1974, Cuchillo Oro is the hero's name, an Apache warrior who carries a shiny golden dagger. The Cuchillo Oro in this episode of Deathlands is not the same hero as the Apache series, however the names suggest that the two are related.

Pony Soldiers advance the overall storyline and provides a number of action-packed sequences that capture the same essence and quality the series typically possesses. There's a new character that joins the group at the end of the novel and an establishment that Cort Strasser may appear as a main villain again. Overall, another solid entry into the series and further proof that Laurence James really turned the corner with Homeward Bound. This was an enjoyable reading experience.