The House of Numbers 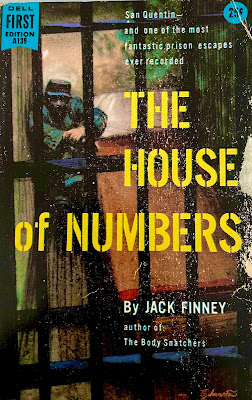 Walter Braden, Jack Finney (born John Finney, 1911-1995) was born in Milwaukee, Wisconsin and attended Knox College in Illinois. Aside from being an advertising writer in New York, Finney wrote a number of novels using the name Jack Finney. Many of his literary works have been adapted for film and television, including The Body Snatchers, Good Neighbor Sam, Assault on a Queen and the subject at hand, The House of Numbers. This was the author's third career novel and was initially published in 1956.

Arnie and his girlfriend Ruth become engaged and Arnie is looking for the perfect ring. Despite having very little money, Arnie buys an expensive ring with a check that won't clear the bank. After making rounds, Arnie cashes a bunch of checks at various retailers for cash and deposits the money. Needles to say, Arnie ends up in California's San Quentin prison for check fraud. According to this novel, most prisoners had sentences that were listed as the number of years to life. In Arnie's case, he's serving five years and his criminal record is five years to life. That's important to know.

In the first chapters, the prison warden summons Arnie to his office and explains that another prisoner saw him assault a guard. Arnie did it, but thought no one was around to witness the assault. The warden threatens Arnie to explain his actions, otherwise he will accept the other prisoner's testimony as fact. Arnie refuses and he's sent back to his cell to await whatever fate he's destined for. Now, referring to this Californian law, Arnie knows that anyone with a "life sentence" that attacks a prison guard is guaranteed a death by lethal injection. Either Arnie leaves the prison as a corpse or an escaped convict. That's when his brother Ben becomes involved.

Arnie reaches out to Ben and begs that he break him out of San Quentin, one of the most fortified prisons in the country. Along with Arnie's fiance Ruth, Ben begins scouting the prison and designing a plan to liberate his brother. Ben and Ruth move into a neighborhood near the prison and learn that their neighbor is actually one of the prison guards. This becomes a real problem when the guard casually mentions to Ben that he's seen him at the prison visiting an inmate. Arnie's escape would surely be linked to Ben.

Finney's narrative unfolds as a unique first-person presentation from both Ben and Arnie. Although the author does not necessarily specify who is speaking, the reader can instantly decipher it depending on where and with whom the character speaks. Another unique aspect of this prison break story is the means by which the escape occurs. Ben formulates a plan to break into the prison and assume the role of Arnie. This frees up Arnie's time to work on the getaway through an elaborate combination of underground excavation and warehouse work. While Ben becomes the prisoner, Arnie is essentially a free man. This adds an alluring enhancement to the narrative; will one brother betrays another? The plot thickens when Ben and Ruth develop a romantic chemistry.

The House of Numbers was a good crime novel that used some new tricks to spice up the average prison break formula. I liked the concept and the various questions it presented - will the guard rat out Ben, can the warden be trusted, is Ruth serious about her passion for Ben, will Arnie become greedy? These questions are all asked and answered over the course of the book. Getting there was really fun. If you enjoy prison break novels, The House of Numbers is a dependable selection.

Email ThisBlogThis!Share to TwitterShare to FacebookShare to Pinterest
Labels: Prison