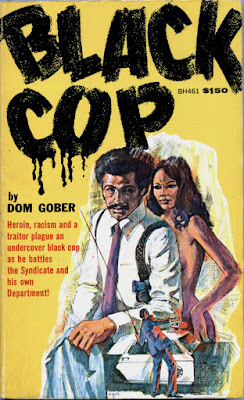 Joseph Gober Nazel (1944-2006) was a Vietnam War veteran and a successful writer for Los Angeles African-American publications such as The Wave, The Sentinel and Players. He is also the author of over 60 literary works, including men's action-adventure paperback titles such as Iceman and My Name is Black. Using the pseudonym Dom Gober, Nazel authored four books starring an L.A. police officer named James Rhodes - Black Cop (1974), Doomsday Squad (1975), Killer Cop (1975) and Killing Ground (1976). All were published by Holloway House, an African-American publishing house.

In Black Cop, the series debut, readers are introduced to Vietnam War vet James Rhodes as he’s working a bust for the LAPD’s narcotics division. He despises his white partner Tucker and often reminds readers that the black race has been in chains for hundreds of years. He's disgusted with crime, racism, the city and the police. This bust is another way for Rhodes to channel his aggressive energy to improve the community and its residents. But, getting drugs off the street isn’t easy.

The plot is an easy giveaway when Tucker stops at a pay phone before the bust. He divulges information to drug smugglers in exchange for money. As Tucker and Rhodes arrive at the scene, they are caught in a violent ambush. Tucker is a spectator as Rhodes participates in the shooting.

After meeting with the chief to express his concerns about the division and its leaks, Rhodes takes on an infiltration role. In accordance with the chief's instructions, Rhodes will go on sick leave secretly assuming the identity of an average citizen. Its purpose is to investigate drug trafficking to find out who sells and purchases information.

Nazel’s narrative has Rhodes busting heads in bars and housing communities as he seeks out a dealer named Wilson. Rhodes lines up with a gang run by a violent felon called Blackjack. He also falls in love with a woman whom Wilson coveted for years.

Black Cop isn’t great and pales in comparison to an Ed McBain police procedural or something raw like Super Cop Joe Blaze. Rhodes is a tough guy with martial arts skills and intelligence, but he isn’t that interesting. I found the bad guys more intriguing. That doesn't mean Nazel's novel is boring. It is loaded with excessive violence and mayhem mixed with pure male testosterone. At the end of the day that still doesn’t make a good story. At some point I may visit the sequels, but I’m in no hurry.