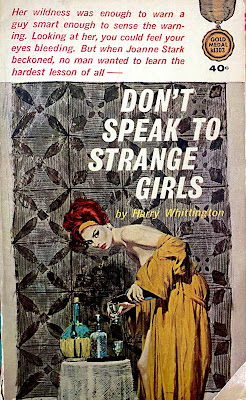 Harry Whittington was a master of crime-noir, but wrote novels in many different genres like romance, sleaze, slave gothics and westerns. I've mostly been attracted to his crime novels and westerns, but I wanted to step out of my comfort zone and try something different. I decided to purchase his 1963 paperback Don't Speak to Strange Girls. It was originally published by Fawcett Gold Medal and now exists as an ebook by Prologue Press.

Clay Stuart is a 45 year old movie star living in Hollywood, California. Clay is from a poverty-stricken family in Nebraska and now lives a life of luxury. He's experienced decades of marquee film success as a leading man in war and westerns. In the first few pages, Clay attends the funeral of his longtime wife, Ruth. Back in his spacious mansion, Clay begins to receive the encouragement and greetings of his dedicated staff. His business manager is Marty, his agent is Marc and his assistant Kay deals with the rest. The trio urge Clay to mourn, but to get back to work as soon as possible. It will do him some good.

Clay doesn't go back to work. Instead, he grieves with bottles of alcohol and a sense of displacement. His wife is dead. What happens now? Marty and Marc both attempt to cheer Clay up with hunting trips, prostitutes and a script for a new western called Man of the Desert. Even Clay's studio execs want him back. But Clay is despondent and can't find a reason to rise and exist each day. That's when Joanne Stark arrives.

The initial introduction is made over the telephone. One day, Clay responds to the phone and a young woman mysteriously charms him. Her questions are rather innocent, but she has a self-confidence that most women do not possess when chatting with celebrities. Clay wants to know how she obtained his unlisted number and she flirts around the answer. Eventually, he bids her farewell and dismisses the call as a starstruck fan who got lucky with a Hollywood insider. She'll never call again. But she does. And, for the first time in a long while, Clay feels excitement again. He gains a thrill that he hasn't experienced in decades. Joanne Stark is an amazing individual... by phone. Should they meet?

Against the advice of almost everybody, including his wise old butler, Clay invites this young woman into his home. When Joanne shows up, Clay is astounded by her beauty. She's like a living, breathing doll. Her behavior is both seductive and innocent, a rare combination which causes a reversal of roles. Clay is infatuated with Joanne. She explains that she has a love for Clay since she was little and that she wants what he has. She wants to become an actress, she wants to be famous, she wants to be rich.

Despite Kay's judgment, Clay and Joanne start a fire that burns for weeks. Both are madly in love and Clay, who could be Joanne's father, feels young again. As Whittington's narrative expands, Clay begins to suspect that Joanne may be using him to gain a shortcut into Hollywood. But he's so in love, he doesn't care about it. Is he able to maintain a one-way relationship with this young, beautiful woman? Once she gains her own fame and fortune, why will she still need Clay? After Clay's agent looks into Joanne's small town history, things begin to look rather bleak for Clay's future. This woman is a wildcat.

Whittington can write his ass off and Don't Speak to Strange Girls is exceptional. There's so many introspective aspects to the story that make it so compelling. Whittington wants to know what we could do for fame and fortune? He examines the Hollywood elite and how it compares to the daily lives of average Americans. It's a fish out of water story, but it goes both ways - Joanne caught up in the filthy rich and Clay adjusting to a younger generation. When each is exposed to the other's social world, it triggers a chain reaction that affects their emotions in several unusual ways.

Like the films A Star is Born and (ahem) Pretty Woman, Don't Speak to Strange Girls brilliantly exposes the consequences and fallout when the average human consumes too much too quickly. It's elementary, but not in the hands of Harry Whittington. Instead, it's one of his greatest novels and it doesn't contain a single murder. Well, maybe just that one near the end. But you should find out on your own. That's a pretty big invitation.