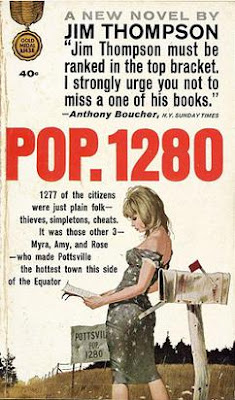 Jim Thompson (1906-1977) is a celebrated author of noir paperbacks from the 1940s through the 1950s. I've struggled with his writing style and haven't latched onto that one Jim Thompson novel that inspires me enough to fully appreciate his literature. Many point to Pop. 1280 as one of his finest works. It was originally published in 1964 by Fawcett Gold Medal and has been reprinted numerous times since.

Nick Corey is Sheriff of Potts County, a rural riverside town with a population of 1,280. Corey sleeps late, drinks at work, accepts bribes from the local whorehouse and rarely carries out police work. He's the ultimate scoundrel. After years of being verbally and physically abused by two town pimps, Corey requests the aid of a nearby county sheriff named Ken Lacey. Corey sits down with Lacey to explain his dilemma. After ridiculing Corey, and providing a lot of racist comments, Lacey instructs Corey to become deadly aggressive.

When Corey comes back to town, he takes Lacey's ill-informed advice to heart. He shoots and kills both pimps and tosses their bodies into the river. These murders push Corey to continue this vicious aggression and put caution to the wind. Corey also begins having an affair with his wife's friend Rose while simultaneously engaging in a sexual relationship with a town woman named Amy. Throughout Thompson's speech, Corey plans and kills people while ensuring his re-election in the upcoming vote.

If Pop. 1280 is Thompson's masterpiece, then I have little hope that I will ever like the author. I hate novels where I must reside in the mind of a psychopath. The novel is presented in the first person of Corey's perspective and I just wanted to escape his model of thinking. While these types of "ride with the killer" novels are popular, I just can't seem to enjoy them. With the killer, and the killer's intentions, in full display, there is no real mystery or suspense. It's like trying to get the toothpaste back in the tube. Once it is out, it's out.

Like most of Thompson's novels, every character is a worthless human being devoid of any common decency. I didn't have any reason to love anyone, and I didn't care what happened to them. I need a well-written narrative with characters that I can identify with and sense a kind of connection with. I need to care about the characters. Thompson provides none of that. Instead, his objective is just to create excessive characters that are profane, too sexual and have very little common sense. In poor taste, he passes these characters off as an inbred race of rednecks.

I know I don't understand the full significance of Thompson's writing and what makes it truly unique. That's okay, I don't have to understand it or like him. His dialogue, murderous viewpoint and morally flawed characters attract generations of worshiping fans. I'm glad he has a fan base. After trying to enjoy a handful of his novels, I probably will never open another one. This kind of literature seems beneath me. There are remarkable books from remarkable authors. From my perspective, Jim Thompson is not one of those.