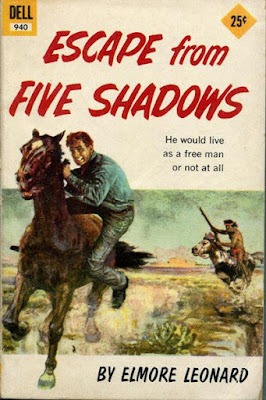 Elmore Leonard was a prolific author of crime-fiction and thrillers. A number of his works have been adapted to film, such as Get Shorty, Rum Punch and Out of Sight. However, he cut his teeth on classic western tales and novels. One of them, Escape from Five Shadows, was first released by Dell in 1956. It has since been reprinted by a variety of publishers many times.

The main character of the book, Corey Bowen, explains how he ended up in the dusty and dry workcamp of Five Shadows. After his father died, Bowen worked as a miner and a cattle herder. Between jobs, Bowen meets another cattleman named Manring in a bar. After learning from Bowen's experience, he hires Bowen to ride along with him on a small cattle drive. Bowen reviews Manring's bill of sale and determines that he legitimately bought the cattle. However, after only a couple of days on the trail, the law comes. Bowen and Manring are charged with stealing cattle and sentenced to years of hard labor at Five Shadows.

This Arizona prison is run by a man named Renda. The government provides Renda .75 cents a day for each of the 30 prisoners and cash for supplies. Renda keeps a majority of the money and limits the prisoners to a small diet with very little accommodations. They sleep on blankets, eat wormy food, and suffer health conditions. Renda can't afford any of his prisoners to escape, thus his criminal empire will fold.

Throughout the book's narrative, Bowen and Manring plan a prison break. This will not be easy due to the use of Apache Scouts and trackers around the camp's outer perimeter. However, in pocket narratives, Leonard creates some inner turmoil within the camp. The superintendent's wife is planning on exposing Renda, but she's being held against her will. She proposes that Bowen kill her husband and make a run for it. At the same time, a young woman named Karla has an attraction to Bowen. She wants to expose the corruption and Bowen's innocence through the courts. What method does Bowen use - escape from violence or patiently await a new trial in a judicial system that has already betrayed him once?

Leonard's western examines political corruption - greed, deceit, and the quest for power. Bowen's decision on how to escape the prison is an interesting one. There's a lot of moving parts and the novel requires the reader's concentration. The narrative isn't laced with action, but instead relies on strong characters and an intriguing story. I found both female characters to be determined to a fault - one craving violence and the other nearly angelic. The contrast was brilliant.

If you require an action-packed prison break story, Escape from Five Shadows is unlikely to satisfy you. If you want the complexity of crime and the slow unravel of authority, this novel will deliver the goods. It's a smart, well-written novel that offers a rather unique plot for the time period. Recommended.