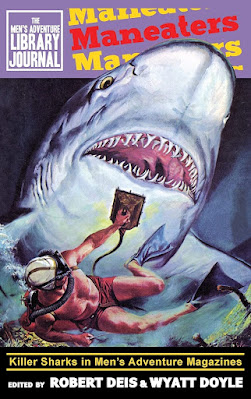 Both Robert Deis and Wyatt Doyle have been doing God's work. Their collaboration on art coffee-table books like The Art of Samson Pollen (Pollen's Women, Pollen's Action, Pollen In Print), Eva: Men's Adventure Supermodel, and Mort Kunstler: The Godfather of Pulp Fiction Illustrators is nothing short of spectacular. But, my favorite of their collaborations is the series titled Men's Adventure Library Journal (New Texture). These books showcase not only great artwork from vintage Men's Adventure Magazines (MAMs) but also the fictional stories that accompanied them. We've covered a number of these titles here and on the podcast. Books like Barbarians on Bikes, Cuba: Suger, Sex, and Slaughter and He-Men, Bag Men & Nymphos.

Inside, Deis' preface and Doyle's "Death Has Sharp Teeth" introductions outline the book's purpose and how sharks became the most common "man versus animal" stories in MAMs. They proved to be the best adversary, an underwater villain that later soared to new heights with the theatrical phenomena known as Jaws. Doyle explains that "...even among the onslaught of tigers, alligators, and bloodthirsty rodents, sharks were something special." Steve Cheskin echoes those sentiments with his informative foreword. Cheskin, the creator of the beloved Shark Week television programming on Discovery Channel, explains how the shows began in the late 1980s. He illustrates that there is a mystery about sharks, a natural fear of them that captivates people.

Anyone familiar with MAMs, or Deis and Doyle's prior compilations, will appreciate their dedication to preserving the eye-catching artwork that mesmerized readers of these magazines. On Page 89, Mort Kunstler's artwork is presented as a terrific gallery. The gallery includes an informative write-up titled "The Godfather Meets Jaws." Beyond Kunstler, this book is loaded with artwork from the likes of Ken Barr, Bruce Minney, Walter Richards, Clarence Doore, Wil Hulsey, and Robert Stanley. I'm not an art aficionado, but these paintings are simply incredible.

With nearly 20 stories, there's plenty of meat to sink your teeth into. From Ray Nelson's cleverly funny "The Mail Carrying Shark" (Real, Sep. 1953) to Tom Darcy's gruesome adventure "The Sharks Got My Legs" (Man's Adventure, Oct. 1959), these stories are outrageously scary, but possess action and adventure narratives featuring prevalent heroes.

If you aren't a Men's Adventure Library Journal consumer, what's stopping you? Beyond just this Maneaters book, there are hundreds of awesome paintings, gripping stories and unique analysis saturating these awesome compilation and coffee-table books. This is such a neat nostalgia that celebrates a special place in American literature. There's no better place to test the waters than this shark-infested feast.