The Old Man's Place (aka The Hard Guys) 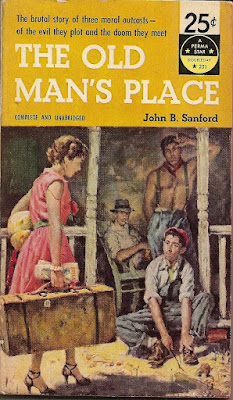 John Sanford (1904-2003, born as Julian Shapiro) experienced a short career in law before discovering the literature of Ernest Hemingway. In 1931, Sanford wrote his first novel, The Water Wheel, the first of three independent titles that took place in the Adirondack Mountains of New York. After reading Sanford's amazing noir novel Make My Bed in Hell (1939), I was excited to try another of Sanford's novels. Thanks to Brash Books, The Old Man's Place was re-printed this year for the modern public. This Sanford novel was originally published as a hardcover in 1935. It was subsequently reprinted by Perma Books in paperback form in 1953. In 1957, Signet published the book as The Hard Guys. The novel was adapted into a movie in 1971 as My Old Man's Place.

After his mother's death during childbirth, Trubee Pell was raised by his father, Walter, on a farm near Warrensburg, New York. After abandoning an unfortunate marriage, Trubee joined the army and served during World War I. It is there that he met two low-life scoundrels - James Pilgrim and Martin Flood. The audacious trio boozed it up during the war and afterwards bummed around the U.S. avoiding labor and responsibility. Out of ideas, Pell suggests that the three of them go back to New York and shack up with his father.

Walter lives a simple, farming life in solitude. At first he's happy to see his son, but soon realizes that tribe has changed significantly since the war. The three men physically and verbally abuse Walter. They force him to work, cook their meals and provide free lodging. While mostly drunk, the men spend their days shooting, illegally hunting and robbing. During a home intrusion, James steals a stack of nude magazines. In one of the books, he finds an ad for dating.

Like the dating apps of today, James sends out $1 and a brief biography explaining his physical appearance and attributes. The company then forwards this information to a woman in his area. In this instance, James' letter is sent to a young woman from New Jersey named Anna. Her parents have died and she is looking for a husband and a new life elsewhere. James, who is short and fat with rotten teeth, explains in his letter that he is tall, handsome and has a large farm. When Anna arrives at the Pell farm, she is shocked to find out that James does not fit his biography. In addition, she is surrounded by three vicious and sexually charged men in a foreign place miles away from anyone.

Sanford's The Old Man's Place is a carefully designed character study bursting with tension and intrigue. I found myself so emotionally invested in these characters and their raw, primal instincts. The author creates this slow spiral into some very dark places. The ethical, morally centered Walter experiences so much loss and heartache as a father. I was able to identify with this character so much and I felt so much sympathy for him. Anna, who borders upon the angelic, is pushed into this pit of vipers of violence and moral depravity. Sanford's narrative is saturated with rage and grief and has this unusual subtext on human suffering.

Like his novel Make My Bed in Hell, John Sanford is nothing short of extraordinary with The Old Man's Place. It's darkly wonderful and honest, well ahead of its time considering the 1935 publication date. Sanford is seemingly timeless, possessing a rare skillset that rivals some of the best noir authors of all-time. My hat is tipped to Brash Books for affordably inviting modern ages to experience this sensational author.