Tender is the Flesh 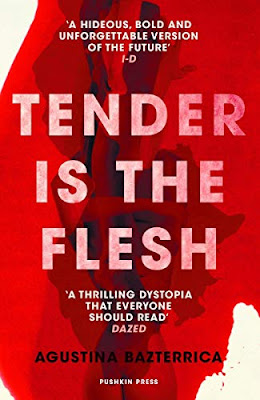 Augustine Bazterrica is an Argentinean writer of novels and short stories. Her second novel, Tender is the Flesh, earned literary prominence in her country. The 2020 Dystopian work has received international praise as a powerful, stunning look at capitalism and industrialized farming. After being encouraged by a friend, I borrowed her copy to check it out.

In the future, animals have been contaminated by a deadly virus. Due to the health risks, most of the world's animal populations have been destroyed. Due to lack of animals, cannibalism has become legal. Body farms have been created that raise humans in the same way that cattle are raised today. These humans (called heads) are raised to consume, so they have no intelligence beyond the walls of the cage. Their vocal cords are removed and based on ethnicity, race, age and gender, humans are packaged into categories and sold. Human meat (known as special meat) is then bought by processing plants (slaughterhouses) where the entire organism is used for food or manufacturing.

Marcos is a second generation employee of the meat processing industry. He acts as an account executive for "meat runs" where he reviews processes and procurement. After experiencing the loss of a child, Marcos goes into a deep depression and his wife moves out. This loss evokes empathy for the people who are slaughtered. Most of the author's narrative is devoted to Marcos contemplating the whole meat industry and its negative impact on mankind.

After Marcos is gifted a woman, high human grade, he begins to look after her. Naming her Jasmine, Marcos develops an illegal relationship with her that results in a pregnancy. If the law finds out he had sexual intercourse with a "head," he will be slaughtered. In order to keep the relationship and pregnancy a secret, Marcos hides Jasmine from his home and starts a process of resigning from his work. Complicating matters is the death of his elderly father and a strained relationship with his nagging sister.

Tender is the Flesh is inspired by several novels. In many ways it resembles the 1953 dystopia novel by Ray Bradbury, Fahrenheit 451. In this book, the protagonist begins to question the government's strict rules and the importance of free will. Other influences range from Aldous Huxley's Brave New World (1932) and the 1973 film Soylent Green, which was loosely based on Harry Harrison's 1966 novel Make Room! Make Room!. More recently, the Japanese anime The Promised Neverland, originally released in 2019, is close to the premise of the story.

As much as I wanted to like Tender is the Flesh, I found it too reliant on graphic torture and death. The central story of Marcos becoming an enlightened citizen was lost in the dense atmosphere of dismemberment and gore. Frequently, the author details the human slaughterhouse, the processes, and additional bi-products of this savage society. In disturbing scenes, Bazterrica describes the brutal torture of puppies and the raping of an adolescent girl. These scenes exist merely for shock value and reminded me of the insane carnage of Jack Ketchum's The Girl Next Door (1989).

I appreciated the social warnings and the clear criticism of animal cruelty, corporate greed and capitalism. There are positive takeaways, but it requires a strong stomach and the ability to distance yourself from the violence. I found it distasteful and over the top. Read at your own discretion.