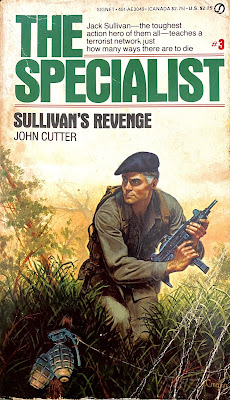 The Specialist is an 11 book series that ran from 1984 through 1985. The series was authored by John Shirley under the pseudonym John Cutter. These novels were originally published by Signet and are now available as affordable ebooks through Lume Publishing. I've read and reviewed the first two entries in the series and was happy to jump into the third installment to continue the series through-story.

In the first two installments, Jack "The Specialist" Sullivan is featured as a vigilante that helps average citizens with various problems they experience. He never charges for these services but will gladly take any monetary handout. His experiences in Vietnam and Afghanistan enhance his resume significantly. Sullivan is an expert in weapons, hand-to-hand combat and military strategy. While he's performing these services, Sullivan also has a goal. He witnessed his wife's murder by a terrorist cell led by an individual known as The Blue Man. At the end of the second installment, Manhattan Revenge, Sullivan learns that The Blue Man may be running a terrorist training camp in the Oregon wilderness.

In Sullivan's Revenge, the third series entry, this backstory is resolved as Sullivan travels to rural Oregon to find The Blue Man. To accomplish the mission, he uses his friend Malta (his assistant in the first two books) to accompany him to the area to help plan the assault. Malta also recruits two hardened mercenaries to assist Sullivan.

Traditionally, men's action-adventure novels of this type require that the hero join the bad guys in an elaborate scheme to destroy the heinous organization from the inside out. Shirley's uses this genre trope to place Sullivan inside the terrorist camp. It's here that Sullivan passes a physical trial to join the organization. In doing so, he comes face to face with The Blue Man. A bulk of the narrative has Sullivan suppressing his rage to better coordinate an assault with his outside team. He also experiences a pleasurable relationship with The Blue Man's daughter.

There's no real surprises here as Sullivan mows down the terrorists like a high-numbered Mack Bolan installment. Shirley is a great writer and I enjoyed the side story of Malta facing a group of racist local bullies. I don't own the fourth installment of this book, but the events in this novel's finale certainly seems to resolve this opening trilogy of stories. I found all three books to be enjoyable and a great way to propel this series into the upper echelons of men's action-adventure fiction.