Storm on the Island 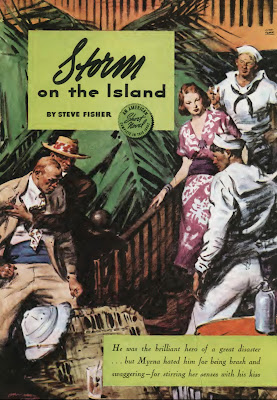 Steve Fisher (1912-1980) was a prolific American author and screenwriter. Fisher cut his teeth on the early pulp magazines before transitioning into full-length novels and screenplays. I've enjoyed his short stories and was happy to discover another of his literary works on Archive.org. The novella is called "Storm on the Island" and it was published in the July, 1938 issue of The American Magazine.

After her father‘s retirement from the Navy, Myrna invests some of his money into buying the Hawaiian Heaven Hotel off Pearl Harbor shore. She runs the small hotel and serves beer to the sailors who need a midpoint between the water and Honolulu. It’s a quiet, peaceful life until the emergency radio begins announcing that a Navy submarine has become trapped in underwater debris. After three days of monotone and grim announcements, the men on board have begun to lose the remaining oxygen.

The sub, S14, is stuck on the ocean floor, wedged in discarded wooden wreckage with torpedo tubes that are jammed. Hoping for a rescue attempt, the Navy sends divers Harry Morris and Richard Brennan down to the vessel to attempt to clear the tubes. If they are cleared, the men can be safely ejected. But, the attempt fails and only Brennan makes it back to the surface alive.

On the last night of the rescue attempt, readers learn that a guest in the hotel has been murdered and their corpse placed in a seldom used wine closet. Who’s dead, who’s the murderer and how is it related to the submarine disaster? The bulk of this complex mystery is brought to life when Brennan checks into the hotel awaiting a Navy request and the obligatory press interviews.

Fisher’s hotel ensemble is a cast of likely suspects, each possessing a possible motive for murder. It’s a traditional mystery complete with a competent Hawaiian detective named Mulane probing for answers. Brennan and Myrna strike up a romance, but when Myrna’s father is murdered, all fingers point to Brennan as the killer.

I really enjoyed this short novel, and found that Fisher was really in his element. Fisher himself served in the Navy aboard a submarine stationed in Hawaii, so his writing has a descriptive sense of realism. The romance angle is Fisher’s signature. Combining these two ingredients into a hotel murder mystery was brilliant.

Storm on the Island is a captivating mystery with unique characters in an exotic location. Even better is that the story exists for free at archive.org HERE.