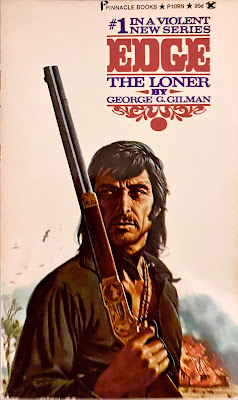 “The Most Violent Westerns in Print” was a marketing gimmick utilized by Pinnacle Books for their long-running and wildly successful western series Edge. The books were written by British author Terry Harknett (1936-2019) under the pseudonym George G. Gilman and ran 61 total installments from 1972 through 1989. Harknett also authored a number of other western series titles including the equally successful Adam Steele. In 1989, Harknett even wrote the first of three crossover novels featuring Adam Steele and Edge together serving as the co-heroes. With all that said, I've enjoyed Harknett's various titles over the years and decided I would find out just how violent this Edge series is. I'm starting with the character's debut in Edge #1 - The Loner.

This first book in the series is an origin story explaining how Josiah Hedges became the violent western vigilante Edge. The opening pages features Hedge's innocent young brother Jamie anxiously awaiting his brother's return to their Iowa farm. Hedge has been away fighting in the American Civil War as a noble Captain in the Union Army. After years of sending his paychecks back home, Hedge and Jamie hope to use their savings to expand the family farm. Once Jamie spots some former Union soldiers riding towards his homestead, he begins to expect the worse. His brother isn't with them.

The first two chapters of The Loner isn't for the squeamish. Hedge's compatriots in the Union have been watching him send money back home. They realize he has a sizable officer's pay, and they realize how easily they can acquire this money for themselves. Leaving before Hedge, these six violent criminals arrive at Hedge's farm and immediately shoot Jamie's dog in cold blood. Next, they shoot Jamie in the knee before stringing him up to a tree for torture. Jamie refuses to tell the men where the money is, so they kill him (finally) and burn the Hedge farm to the ground. Hedge arrives to find his brother's broken and bloody corpse among the farm's burning inferno. Retrieving the money from it's hidden location, Hedge rides out to kill the bastards.

The Loner is an intense, stereotypical western that checks off nearly all the western tropes: stagecoach robbery, jailbreak, Indian shootout, horse-stealing, hanging, saloons, revenge and the mandatory madams of the wild, wild west. Hedge, or what most people across the frontier hear as "Edge", is immediately likable and ends nearly every scene with some sort of sarcastic wisecrack. When a sheriff is decapitated, Edge cracks, “Guess you just lost your head, Sheriff.” Sometimes this deterred from the concept that Edge is in mourning for his brother and is hellbent on revenge. However, his savage use of a straight-razor, repeating rifle and Remington pistol reinforces the idea that Edge is a man to take seriously.

As a series debut, The Loner delivers everything readers want. There's a clear direction for the character, a reason to exist and a defined plot that helps propel this character into endless action and stories for years to come. As a pure western, Harknett delivers the goods in grand style. Nearly every chapter is a bloody testament to violent, old-west storytelling. It's also what any men's action-adventure fan would expect from a publisher like Pinnacle. I'm excited to realize I have 60 more installments to explore. Yee-haw!