Parker #02 - The Man with the Getaway Face 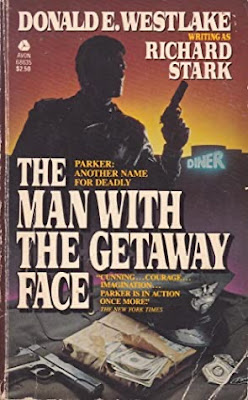 Richard Stark was the popular pseudonym of Donald Westlake, and his Parker heist-adventures may be the best series of the genre. The second book in the series is The Man with the Getaway Face from 1963, a direct sequel to the opening installment, The Hunter.

Evidently in the 1960s, there was a burgeoning underground industry of plastic surgeons who would change your face if you were on the run from the mafia or the law. Earl Drake did it. Mack Bolan did it. And in the opening scene of Parker #2, our hero has the procedure to stay one step ahead of the mob bosses he upset in the previous book.

The action quickly shifts to new-face Parker being invited to execute an armored car heist with a five-man crew. The original plan was garbage, so Parker agrees to help only if he can rework the scheme and streamline it to a three-man job with bigger shares for each participant.

For the first time in the series, the reader gets to see Parker’s methodology in the planning and execution of a heist. The author walks us through the site survey, bankrolling, gun purchases, vehicle acquisitions and the post-heist location choices. We also get to meet the unreliable team members who sometimes gravitate to this line of work. In this case, the wild card is a dame named Alma who Parker suspects is planning a double-cross.

The heist story forms the core of an excellent Richard Stark heist novel, but there’s an important side plot about someone tracking Parker through his plastic surgeon to settle a score. There’s also a detailed summary of the events from the previous novel, and The Outfit isn’t done with Parker. As such, you should definitely read The Hunter first. Consider yourself warned.

The Man with the Getaway Face is another outstanding installment in this nearly-flawless series. I’m really looking forward to reading the third novel, The Outfit, which ties up loose ends from the first two books. After that, you can pretty much read the series in any order. For the uninitiated: Jump in. Trust me, you’re going to love this series.