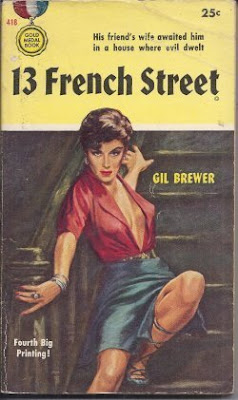 Gil Brewer’s 1951 paperback, 13 French Street, was also his most popular book. The paperback sold over a million copies and sustained multiple printings from Fawcett Gold Medal in the U.S. and foreign publishers abroad. The short novel’s reputation as a sex-drenched story of lust and betrayal made me crack it open for a sample and the pages just kept turning.

Our narrator is Alex Bland, and he’s on vacation visiting his old war-buddy Verne. Upon arriving at Vern’s house at 13 French Street in a fictional southern town, he is greeted at the door by Verne’s impossibly sexy and flirtatious wife Petra, a dame who just oozes promiscuity. Although Alex has never met Petra before, they know each other from letters (aka: paper emails) they’ve exchanged over the past five years. You see, Verne isn’t much of a letter writer, so he had his sexy wife write the letters to keep in touch with his best pal. (Note to dudes with sexy wives: Bad idea.)

Things are awkward for Alex from the moment he arrives. Verne has aged poorly and does a bad job feigning enthusiasm regarding Alex’s visit. Petra can’t help but make bedroom eyes at Alex every time their gazes lock. Finally, a pretty chamber maid confides in Alex that he’d be well-served to keep his bedroom door locked at night.

Thing escalate exponentially when Verne needs to go out of town on business leaving Alex to his “vacation” at the house with Petra. Verne’s elderly witch of a mother lives in the house, and she keeps a close eye on Petra while her son is gone. However, that doesn’t stop Petra from trying to seduce Alex every time the old lady’s back is turned. If you enjoy your vintage paperbacks filled with sexual tension, this one is definitely for you.

Eventually, the old lady’s chaperoning becomes more and more troublesome, and you can imagine where that goes. It takes about halfway through the paperback before 13 French Street becomes a full-fledged crime noir novel in which bad ideas beget further moral slippage. It’s also compelling as hell, and the pages keep flying by - making it abundantly clear why this book was such a sensation nearly 70 years ago.

To be sure, there is some retrograde treatment of women in this book that wouldn’t fly today, but 1951 was a very different world. While I still think that The Vengeful Virgin was Brewer’s masterpiece, 13 French Street isn’t far behind. It remains a lusty noir classic with a femme fatale you won’t forget. Recommended.