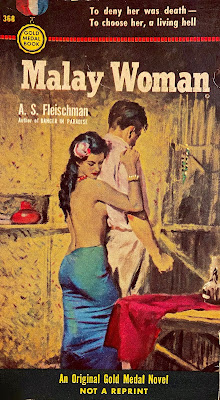 A.S. Fleischman (Avron Zalmon Fleischman, 1920-2010) was a notable children's book writer whose fiction concentrated on the art of magic. From 1948-1963, Fleischman also wrote crime-fiction for leading paperback publishers like Fawcett Gold Medal and Ace. I adored his 1963 novel The Venetian Blonde and was anxious to try one of his earlier books. Flieschman had a penchant for setting his adventure and crime-noir novels in exotic Asian locales so I decided to try the Far East novel Malay Woman originally published by Fawcett Gold Medal in 1954.

The book begins in a Singapore airport and introduces Jock Hamilton, a once thriving rubber plantation manager who is desperately attempting to catch an outbound flight to Melbourne. In his first-person narration, Hamilton explains to readers that he's a fugitive wanted for allegedly killing his wife. Of course, he's innocent but his circle of friends and allies have shrunk since the killing. After the police begin searching the airport, Hamilton escapes onto the street and eventually sneaks onto a steamship headed to Malaysia. But Hamilton doesn't realize he's jumped from the pan into the fire.

The middle section of Fleischman's narrative is a captivating crime-noir set within the ship's sleeping quarters. After hiding in a closet to avoid detection, Hamilton overhears two hired killers planning a hit on a wealthy woman named Kay. As a fugitive from justice and an illegal passenger, Hamilton isn't clammoring to report the conversation to the authorities. Instead, he seeks out the woman named Kay to warn her of the killers. Eventually the action relocates to the hot steamy jungles of Malaysia, but I won't connect the narrative's beacon points for you.

Within the hotblooded femme fatale plot, Hamilton reunites with an old friend at a rubber plantation. The problem is that Jock Hamilton may have fallen in love with Kay but his friend's girlfriend Monique is begging for Hamilton's Jock. She blackmails him into a sexual affair by threatening to notify the authorities and Kay of his fugitive status. The entire third act could have written by Orrie Hitt or Gil Brewer.

While I didn't like Malay Woman nearly as much as The Venetian Blonde, it was still a memorable crime-noir laced with adventure and intrigue. Fleischman is such a skillful storyteller and his words just flow accross the pages so easily. I couldn't put the book down in hopes of learning Monique's motives and Hamilton's ultimate fate as the burdened hero. In three acts, Fleischman manages to weave a number of crime-fiction tropes into an enjoyable and enthralling read. Highly recommended.