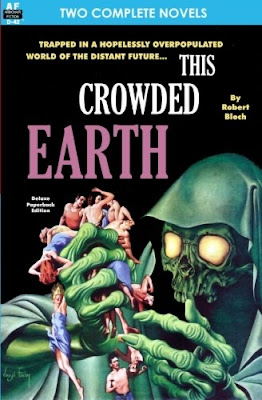 Although he is best known for horror fiction including Psycho, Robert Bloch (1917-1994) was a multi-genre talent with several crime, suspense and science fiction paperbacks as well. This Crowded Earth was a short novel from 1958 that originally appeared in Amazing Stories Magazine exploring the repercussions of rampant overpopulation in the dystopian future of 1997.

As a single man, Harry Collins is only allotted a one-room apartment in a smothering futuristic Chicago with a population of 38 million. Every sidewalk and elevator ride is a crushing mob of humanity. A simple commute to the office for a few miles is a two-hour ordeal. The overpopulation itself is caused by a lack of war and disease that has pushed human life expectancy well into the 90s. A public policy decision that economically rewards couples for having children as well as a lack of meaningful immigration restrictions further exacerbates the population explosion. Basically, everything sucks.

Bloch does a great job of world-building in the opening chapters while giving the reader the same sense of claustrophobia experienced by every character in the novel. A nervous breakdown lands Harry in a government sanitarium with plenty of living space, tons of green land and woodsy trails to stroll. There’s also a flirtatious nurse who seems to really dig our boy. It all seems too good to be true.

Harry’s bubble is burst when he is visited on the asylum grounds by a mysterious stranger who shares the truth about his current living situation. I’m not going to give it away here, but nothing at the facility is what it seems. Suffice it to say that Harry’s mental well-being is the last thing on anybody’s mind on the campus.

There’s a fantastically paranoid early-novel twist that leads to a larger public policy prescription that is both bonkers and offensive to modern sensibilities. The politically-incorrect “solution” to the overpopulation problem is so nuts that even if I spoiled it for you, you wouldn’t believe me. I wish Bloch were still alive, so I could ask him if he meant it to be funny. It’s certainly creative and audacious.

It’s clear that Bloch was a man of ideas, and boy-o-boy does he shoehorn a lot of ideas into this short novel. Many are harebrained, but others are interesting. The plot fascinated me, but there wasn’t a ton of action. If you’re looking for a science fiction shoot-em-up, this isn’t the story for you. I have no particular expertise in speculative fiction, but I genuinely enjoyed the heck out of this one. I’m glad that it remains available from paperback reprint publisher Armchair Fiction.

It’s interesting to read a science fiction novel from 60 years ago predicting how awful the world would be 20 years ago. We have our own unique problems today, but none are as dire as the fiction of This Crowded Earth, and that’s a relief.