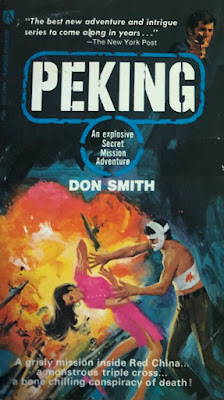 Don Smith’s Secret Mission series ran for 21 installments between 1968 and 1978. The novels star an international businessman named Phil Sherman who takes dangerous assignments from the CIA, and the books tend to be way better than you’d expect from the publisher, Award Books. Although the series can be read in any order, today we visit the first installment, Secret Mission: Peking.

When the reader first meets our narrator Phil, he’s preparing for an exhibition in Prague where he hopes to sell his products - “electronic computers” (remember, it’s 1968) - to some communist bloc countries. A shadowy U.S. Government operative requests that Phil sell a very specific IBM computer to a Czech electronics broker who would then sell it to Red China. The computer is destined for a Chinese atomic research facility to facilitate the manufacture of a nuclear bomb.

What the Chinese don’t know is that the computer Phil is selling contains a hidden bomb trigger designed to level the Chinese atomic facility (recall that computers were a lot bigger back then.) However, even after the sale is consummated, the U.S. government is not done with Phil. Something is wrong with the computer’s inner workings (besides the bomb trigger), and they need Phil to travel into Red China and fix the giant IBM.

Reluctantly, Phil travels to Peking, and we get a very enjoyable “amateur thrust into the world of spies and intrigue” plot. Phil is a delightful narrator, and a sexy Chinese translator is assigned to accompany him on his mission. Can Phil fix the computer and have it installed in the Chinese atomic weapons facility? More relevantly, can he set the trigger and get out of Peking before things start exploding?

Despite some slow stretches and a somewhat unsatisfying conclusion, Secret Mission: Peking was a solid first-installment and definitely worth reading. It’s not as cartoonishly-exciting as a Nick Carter: Killmaster novel, but it’s more fun than a cerebral John LeCarre espionage potboiler. Phil Sherman is an excellent narrator to take the reader on this suspenseful ride. Recommended.