The Hottest Fourth of July in the History of Hangtree County 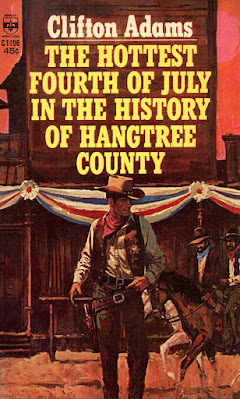 I’ve always regarded Clifton Adams (1919-1971) as a hardboiled author who happened to set most of his novels in the historic American West. Western fiction practitioners like Louis L’Amour mastered the setting and adventure of the Old West, but Adams focused on the malfeasance and skullduggery of the inhabitants. Case in point: The Hottest Fourth of July in the History of Hangtree County from 1964.

The novel begins early in the morning of July 4, 1892 in the town of Elbow, Oklahoma with excited children lighting off firecrackers in the town’s wagon yard driving the townsfolk’s dogs bananas. Marshal Ott Gilman awakens to face the long, hot day ahead. Despite the heat and drought making life difficult for ranchers in booming Oklahoma territory, everyone is excited for a day and night of patriotic rowdy merriment following the afternoon parade. The territory has been growing faster than the municipality can handle, and it’s clear that one Marshal and an aging deputy aren’t enough to police the entire town swelling with drunken cowhands and ranchers.

Early in the day, two gun-toting hardcase brothers named Pete and Willy Prince ride into town in anticipation of the celebration. After menacing the town’s barber, the outlaws learn that their family’s old nemesis, Marshal Gilman, is the law in Elbow, and the brothers have an axe to grind. The dispute goes back a few years to Texas, and it has more to do with the older Prince brother, Nick. The younger brothers send word to Nick that they’ve located Marshal Gilman, and Nick is taking a train from Oklahoma City with another family member to settle the score. For his part, the Marshal seems determined to avoid an altercation with the Prince boys - a passive stance that can only last so long in a violent western paperback.

The backstory about why the Prince brothers are hell-bent on seeing Marshal Gilman dead by nightfall is a revealed little by little throughout the short novel. As the day gets hotter and the brothers get drunker, the violence - both threatened and real - reaches a boiling point. The steps the Marshal takes to ensure he’s not the one greeting July 5 in a pine box also serve to ratchet up the paperback’s tension to a wailing siren.

The arrival of the train carrying Nick and the violent confrontation thereafter are pure gold. The cast of vivid supporting characters is also top-notch. Overall, The Hottest Fourth of July in the History of Hangtree County is a perfect winner, if you like your westerns told through the prism of a hardboiled vendetta story.