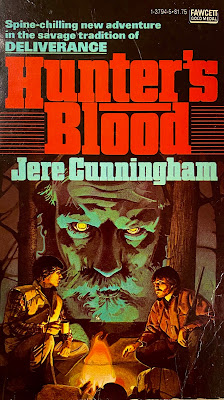 Tennessee native Jere Cunningham co-wrote a number of made for television movies including Judgment Night (1993) starring Donald Sutherland. Before his move to Hollywood, he authored a handful of suspense and horror novels. Cunningham's first book, Hunter's Blood, was published by Fawcett Gold Medal in 1977. It was adapted into a low-budget film in 1986. I disliked the movie but was anxious to find a copy of the original paperback.

Mason, David, Al and Ralph live successful, lucrative lives in the posh suburbs of Memphis. Each year the four men journey to a rural area to hunt deer, reminisce about the good ol’ days and complain about women. This year, Al informs the group that he has recently purchased a secluded, dense stretch of Arkansas timberland. The massive 400-acre spread has been closed to the public for decades.

Before arriving at the dirt paths and trails that lead into the deep forest, the group stop by a trashy roadside bar where they have a fight over ugly women and cheap beer with the local rednecks. The fight eventually spills into the parking lot as the parties hop into vehicles and attempt to outrace one another. Oddly, once the hunters descend into the forest, the beer-swilling hicks hit the brakes and do a U-turn back to town. The city boys condemn the locals as yellow-striped cowards. Little do they know that the act of cowardice was actually stark-white fear.

After camping overnight by the fire, Mason and David wake up and begin trailing a whitetail deer through the foliage. It's here they discover a pile of animal heads and entrails scattered on the forest bed. A short while later, both men stumble into a makeshift camp where Neanderthal men and women are gutting animals and playing with bones and skulls. The shocking scene evolves into Mason fighting to survive and eventually disarming one of the men. This leads to a clash as the hunters are eventually attacked and “hunted” by these violent and strange forest-dwellers.

Cunningham's novel is clearly influenced by the 1972 blockbuster film Deliverance (there's even a comparison to it on the book's cover). I'd also speculate that the author watched Tobe Hooper's 1974 cult-classic Texas Chainsaw Massacre as well. The idea of primitive people living in the backwoods of America's most rural areas was a pop-culture trend that was highlighted by Wes Craven's 1977 film The Hills Have Eyes. Hunter's Blood isn't as extreme or horrific as either of Craven or Hooper's nightmarish imagery, but it's close.

The author's use of the dark forest as a backdrop elevates the intensity and suspense. While the Neanderthals aren't cannibals, they are terrifying as macabre, savage hunters that hack and slash through their victims. In the book's opening chapters, there's an enticing promise that somewhere in the forest lies an abandoned mining town. This addition to the narrative really hammers home the book's climactic finale.

While the book's early dialogue scenes and bar-brawl action was presented as crude and immature, the novel's second half was wildly entertaining. The chase scenes were riveting and each of them seemingly ended in some sort of brutal, bloody mayhem that was consistently rewarding and satisfying. The author never takes things too seriously and the end result is a fun, shocking and memorable reading experience. I'll probably read this crazy book again and again.