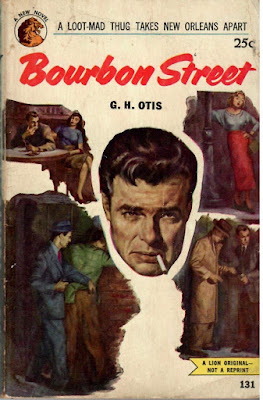 G.H. Otis was a pseudonym employed by Otis Hemmingway Gaylord Jr. (1924-1992), a Colorado native, advertising executive and World War 2 veteran. He used the Otis pen-name for two hardboiled crime novels originally published by Lion Books in 1953 titled Bourbon Street and Hot Cargo. Both of these paperbacks have been reprinted together in one volume by Stark House Books, so I’m starting with Bourbon Street.

Our narrator is Digger, a down-and-out bookmaker in New Orleans’ French Quarter occupying “an airless room in a crummy hotel.” However, the way Digger sees it, things are looking up. He’s devised a brilliant idea to make some money, and all he needs is an audience with the local mob boss to pitch his foolproof plan. The Big Man is a careful sort who has a lot of gatekeepers, including a particularly rough hood named Twigg. Navigating these obstacles comprises much of the paperback’s first quarter.

Otis draws a vivid picture of French Quarter life with snippets of real history and landmarks, and the humid atmosphere runs thick throughout the novel. Eventually, Digger is given an audience with The Big Man, and he’s able to pitch his scheme. The plan is basically a simpler means to smuggle opium and other contraband into Louisiana using a boat moored in the Gulf of Mexico. Digger has devised a ruse that will keep law enforcement blind to the shipments, and he wants to bring the local mob boss in on the deal to ensure he doesn’t wind up sleeping with the crawdads.

The problem is that Digger refuses to give up his many small-time side hustles - bookmaking, craps games, etc. His moonlighting causes problems with his mafia silent partner causing tensions and violence to reach a roiling boil. Will Digger need to betray his friends to climb up the New Orleans crime ladder?

I wanted to like Bourbon Street - I promise I did. Unfortunately, it was pretty sub-standard, and the plotting was off-track. Otis was a good writer, but it took way too long for Digger to implement his plan, and then the story fell into a maritime rut. The novel’s femme fatale arrives really late in the story, and she’s more trouble than she’s worth from the very beginning. Bourbon Street is a good first draft in need of an editor to guide the author through some structural plotting alterations. It wasn’t an awful read, but you deserve better.

Purchase a copy of this book HERE